Universalism and particularism are two competing philosophical approaches that seek to understand the nature of moral and ethical values. Universalism is the idea that there are certain universal moral principles that apply to all people, regardless of their culture or background. These principles are believed to be objective and eternal, and they are seen as the foundation for ethical behavior. In contrast, particularism is the idea that moral values and principles are particular to specific cultures, contexts, or situations, and that there is no one universal set of moral values that can be applied to all people.

One of the main arguments for universalism is that it allows for the possibility of fairness and justice for all people. If there are universal moral principles that apply to everyone, then it becomes possible to judge the actions of individuals and societies based on these principles, and to hold them accountable for violating them. This can help to ensure that people are treated equally and justly, regardless of their cultural background or circumstances.

Another argument for universalism is that it allows for moral progress. If there are universal moral principles that are objective and eternal, then it becomes possible to work towards a better, more ethical society by striving to live up to these principles. This can encourage people to strive for moral excellence, and to work towards creating a more just and equitable world.

However, there are also strong arguments in favor of particularism. One of the main arguments is that universalism is culturally biased, and that it often leads to the imposition of Western values on other cultures. This can be seen as a form of cultural imperialism, and it can lead to the marginalization and oppression of certain groups of people.

Another argument in favor of particularism is that it allows for greater flexibility and adaptability in moral decision-making. If moral values are particular to specific cultures or contexts, then it becomes possible to adapt and respond to different moral dilemmas in a way that is sensitive to the needs and values of the people involved. This can lead to more ethical and effective solutions to moral problems, as people are able to consider the unique circumstances and needs of each situation.

In conclusion, universalism and particularism are two competing approaches to understanding the nature of moral and ethical values. While universalism has the advantage of fairness and the potential for moral progress, particularism offers a more flexible and adaptable approach to moral decision-making that is sensitive to the needs and values of specific cultures and contexts. Ultimately, both approaches have their strengths and limitations, and it is important to consider the benefits and drawbacks of both when trying to understand and navigate moral and ethical issues. 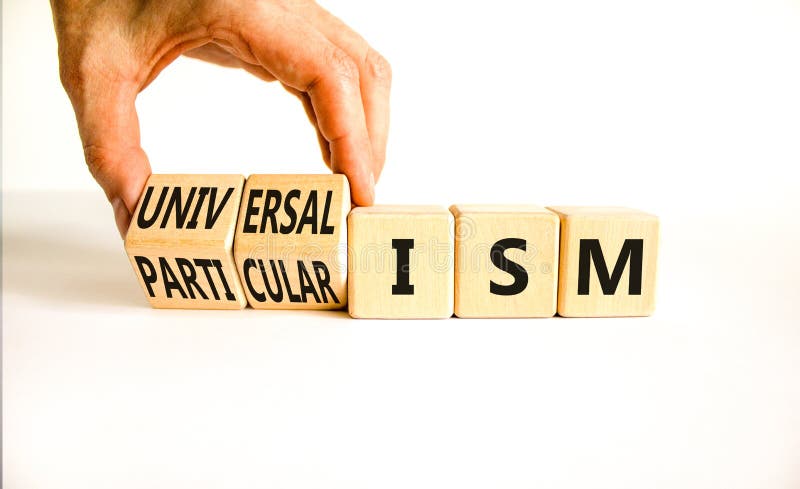 What is classified as right or wrong can differ between cultures, races, ethnic identities, and by social class. Strong universalist cultures use the court to mediate conflicts. Woven into this statement is a profound truth about the way we make meaning in our lives. My last appointment took four hours because she kept pausing to express a point, show me a video on YouTube, or speak to a family member. Just a short time after the opening of the park in April 1992 reality proved to be not so magic. In theory, intersectionality advocates universalistic values dear to Jews, such as social justice and equality. In so doing, we will sanctify the Name of Heaven and the name of Israel in the world.

Considering Universalism vs particularism by comparing Japan and Canada

The historic apolitical culture of Islam and the structures created by national states work together to favor a modern model of international apolitical Islamic missionary work and non-political forms of Islam in domestic politics. Think of the Amidah that we just recited. This hatred has been justified on religious, economic, political and social grounds. Paul and Palestinian Judaism: A Comparison of Patterns of Religion. Paul employs a well-established Jewish-Hellenistic concept that appears in many Second-Temple compositions that present love of the neighbor along with love of God as one of the paramount principles of ethical theology. That means the Japanese tend to help their acquaintances even though that is out of rule and Canadian tend to prefer keeping rule. Yet even Italian nationalists eventually turned against their fellow Italians. For this purpose Hofstede's Improve Four Dimensions Helping Others virtue, not structured activities. The dominant strand of Jewish interpretation of the commandment, from Onkelos second century C. In the 18th and 19th centuries, the mostly German thinkers who laid the groundwork for Reform, Conservative, and even Modern Orthodox Judaism—as well as the academic field of Jewish studies—tended to be skeptical of Kabbalah, and in some cases considered it a source of embarrassment. Universalistic ideologies such as Hellenism, Christianity, Islam, and Communism have historically attacked Jews and Judaism. This notion maintains that God stands in relationship with all people. This falls into the deontology ethics category, a moral law that really makes a difference. If so, it would begin to resemble laws such as the dietary rules of kashrut , ritual statutes that apply only to members of the covenant, and whose value lies in the fact that they are commanded rather than in the practical benefits or moral motives that could be attributed to them. An example of cultural is in Jerusalem the male is not allowed to shave their facial hair because of their religion. It becomes clothed in the reality of law, something one is compelled to take seriously as one must take police ordinances seriously. In Indian culture, the family values are given more prominence than the individual values. It allows a much wider range of actions to be described than with previous approaches such as the situation calculus. It is important to note that particularistic faiths such as Hinduism, Zoroastrianism, and the Druze religion are amicable towards Judaism while particularistic political doctrines are not. Universalists and particularists are likely to differ in the way they make decisions involving moral issues.

The Ethics of the Neighbor: Universalism, Particularism, Exceptionalism 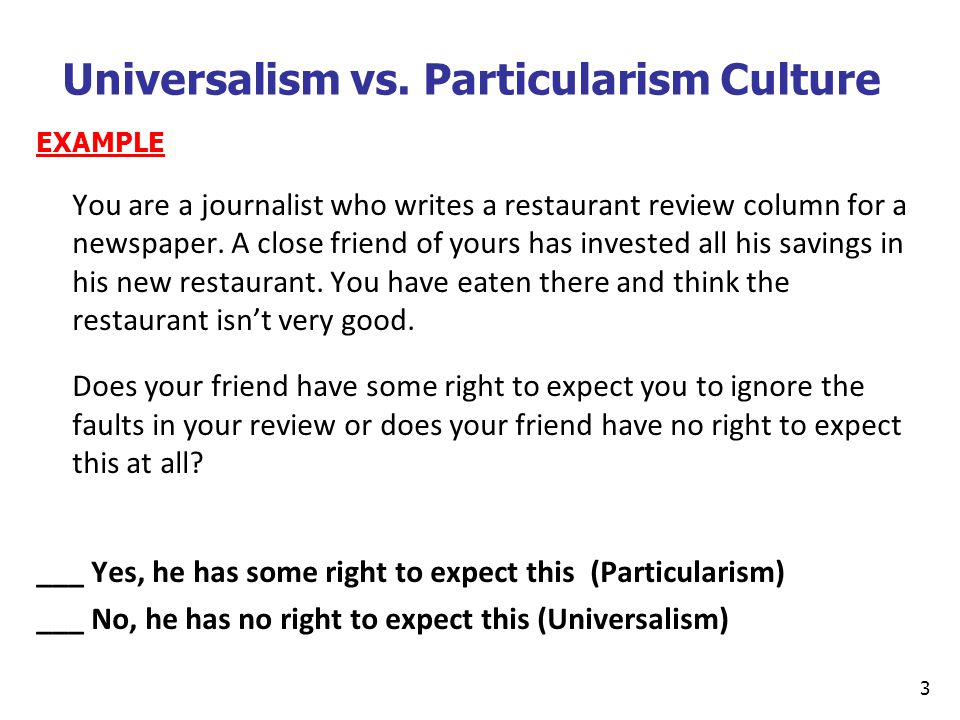 For just as Judaism teaches that all human beings — Jewish and Gentile alike — stand in covenantal relationship to God, Judaism also demands that Jews imitate God and emulate the divine attributes of justice tzedek and mercy hesed. How is the friction between universalism and cultural relativism manifest in India? Is the US specific or diffuse? This index is concerned with how cultures perceive the importance of formal rules compared to particular situations, circumstances and relationships. Thus both historical precedents and contemporary practice generate Islamic movements that are both universalistic and particularistic, local and global, national and transnational. This review seeks to integrate some of the major findings of the project into an explanation that identifies the steps that regularly occur before war. Universalist cultures focus normally more on rules than on relationships. Also some principles for a more enduring form of universalism are suggested.

Universalism and Particularism in Islam

A prima facie explanation is that Judaism, as a distinct ideology, invites hostility from alternative worldviews. Since the 1960s, Catholicism and mainstream Protestantism have radically toned down their universalistic ambitions. The absorption of Islamic movements in national or particularistic contexts derives from within Islamic culture itself from the inherent ambiguity as to whether the fulfillment of Islam requires an Islamic state or only devoted individuals and small communities. This is about the future, a future to which we all aspire, the future that we are constantly striving for in our performance of mitzvot and in our engagement in the world. There the Torah states that God established a covenant with Noah and his descendants after the Flood and designated the rainbow as the sign of that eternal brit. 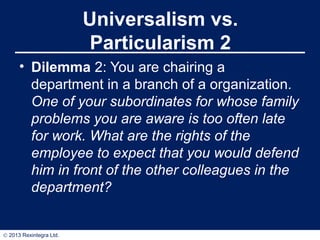 The 20 th century witnessed the defeat of virulently particularistic and universalistic doctrines like Nazism and Communism. For example, we might consider a pure universalist claiming that some action is always wrong or unethical and a particularist simultaneously suggesting that the same action can indeed be wrong, but that it depends entirely on the surrounding circumstances and the people involved. Abstract: Relations between major powers can be described as shifting between universalism and particularism. This essay reviews the various approaches that have been taken in the study of international norms. Well, as it turns out, that is precisely the way our tradition was set up.

J udaism, Human Values, and the Jewish State. This is a sermon about how we can be particularistic in a universalistic world — why maintaining our Jewish identity allows us to hold dear the values of universalism. The second phrase, Adonai Malakh — God reigned in the past, is about the power of Jewish history. The benefit of interdependence is particularly great in the case of conflict involving military fatalities. However, it is nearly impossible for an ordinary citizen to make heads or tails out of them. In the Sifra , an early compilation of midrashim on Leviticus, Rabbi Akiva second century C. It is a history unlike any other and it is ours. 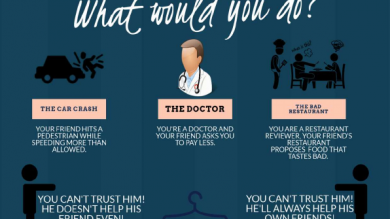 And as well as ending the nuclear talks, Western nations should suspend diplomatic contacts by pulling their ambassadors out of Tehran while leaving lower-level staff in place to monitor the repression of the protests. These analyses reflect a disquieting constancy in warfare and hint at patterns of interchangeability or substitutability among the types of war. The best course of action is never clear. Reference Universalism versus particularism. Sura 38: 87 states that this divine writ is no less than a reminder to all the worlds. The linkages of Islamic universalism and Muslim particularism are also reinforced by the symbolic construction of meaning. According to these studies, the web of expectations created by international norms introduces a modicum of order and predictability to world politics, even in the absence of formal institutions to enforce compliance with their injunctions. 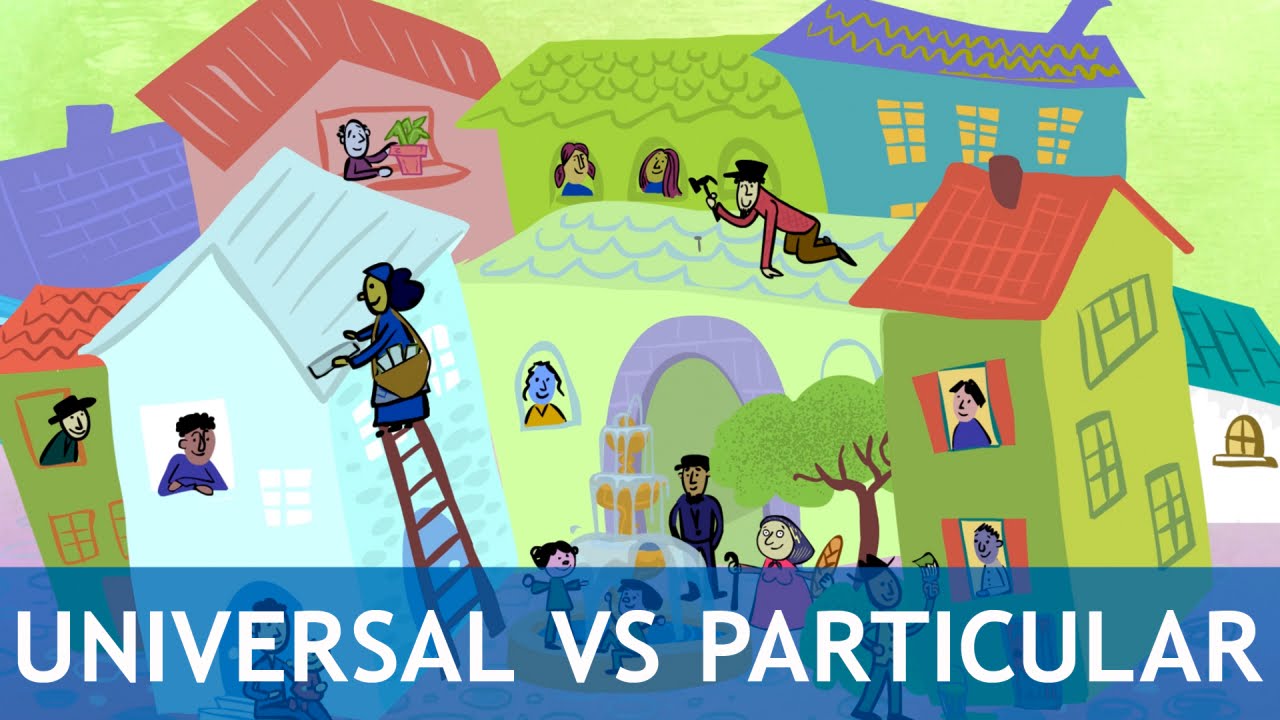 Individualism VS Communitarianism India is a communitarian culture. The same applies to international courts as the ideas of justice and fairness are different in the two instances. Militarized disputes also cause a reduction in trade, as liberal theory predicts. Liberal Democracy, like Judaism, blends elements of particularism and universalism: It integrates particularistic interests into a pluralistic political system that serves universal values. This was in part because Italian Jews were only a small minority, and in part because Italian patriots considered Jews natural allies against a Catholic Church hostile to Italian unification. Democracies and states that share membership in many international organizations have higher levels of trade, but allies do not when these influences are held constant.