Surrealism is a cultural movement that began in the early 20th century, and it is characterized by the incorporation of elements of the unconscious mind and the dream world into art, literature, and film. The movement was founded by the French poet André Breton, and it was influenced by the theories of Sigmund Freud, who believed that the unconscious mind played a significant role in human behavior and the creative process.

Surrealist artists sought to tap into the unconscious mind in order to access the raw, irrational, and imaginative thoughts and feelings that lay hidden within the psyche. They believed that by exploring the unconscious, they could create art that was more authentic and expressive. Surrealist techniques included automatism, in which artists allowed their hands to move freely without conscious control, and the use of dream imagery and symbolism in their work.

The Surrealist movement had a significant impact on the art world, and it continues to influence contemporary artists and cultural production. Surrealism is often associated with the irrational and the absurd, and it has been described as a means of expressing the contradictions and complexities of the modern world.

Surrealist art often incorporates strange and unexpected elements, and it can be disorienting and dreamlike. It is often associated with the use of unusual juxtapositions, such as combining elements from different time periods or placing unrelated objects together in the same image. This technique is known as "surrealist collage," and it was a key element of the Surrealist movement.

Surrealist literature also explores the unconscious mind, and it often employs techniques such as stream of consciousness and automatic writing to access the irrational and unconscious thoughts of the author. Surrealist writers often use dreamlike imagery and symbolism to convey their ideas, and their work can be highly imaginative and metaphorical.

In conclusion, Surrealism is a cultural movement that is characterized by the incorporation of elements of the unconscious mind and the dream world into art and literature. It is a means of exploring the irrational and the absurd, and it continues to influence contemporary cultural production.

Surrealism: A Journey through the Subconscious 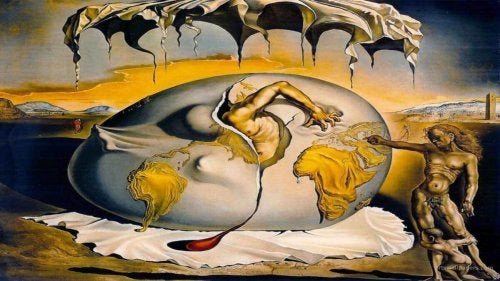 The task that Miro and Kandinsky explored is the presentation of more than what is real. Purchased with assistance from the Art Fund and the American Fund for the Tate Gallery. Salvador Dali, Max Ernst, and Joan Miro are the most famous and prominent surrealist artists. The giant lips float in the sky and also represent the two bodies of Man Ray and Lee Miller. It explored new modes of creativity and new subject matters for painting. It focused on artistic expression through the exploration of the Surrealism: The Portrayal Of Psychoanalysis Originating in France, Surrealism was an experimental philosophy that found its most practical expression in art. Freud had expounded on how the unconscious mind impacts the conscious experience of living.

Surrealism: The Art Of The Unconscious Mind 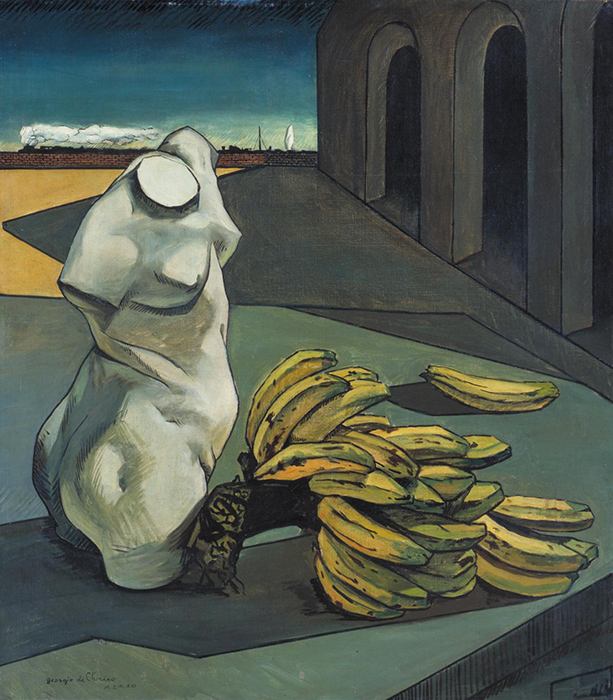 Two of these experiences lie in the subconsciousnessof perception that deals with the intellectual and imaginative potentialof the human mind. The painting was finished in his studio on May 29 of that difficult year. Furthermore, Arthur Danto of University of Columbia, advanced the idea that Joan Miro can be regarded as of the most influential artists in his time and in the 20th century. See also: His manifesto established the main principles of Surrealism, highlighting, in particular, the notion that dreams and the subconscious were the primary sources for Surrealist inspiration. Donna del Lago or Le Bout du monde II. To sum up, the intellectual capabilities of the human mind are far greater than we ever imagined. Leonor Fini, for example, subverted the demonic imagery often used to vilify women, creating erotically charged, often nightmarish scenes dominated by mythical figures, complete with Medusa-esque tendrils or animalistic bodies. 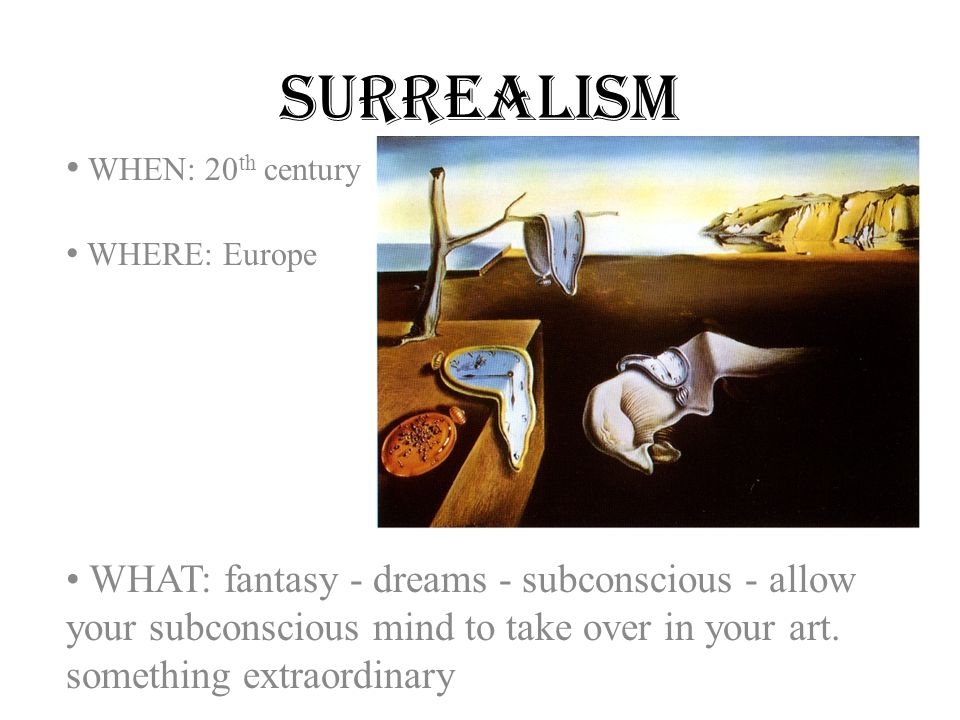 In 1915, the young André Breton was already well versed in literature, contemporary art, anarchism and medicine. I enjoy reading and writing on literature, philosophy, cultural studies and art. He invited Kahlo to exhibit her works in Paris, which eventually even led to the Louvre purchasing her painting The Frame 1938. Perhaps, the real picture of art is not the romantic idea or notion of the object but the innermost and barest conceptualization of the subject matter. The Roots Of Surrealism The Uncertainty of the Poet by Giorgio de Chirico , 1913, via Tate, London Surrealism is an embodiment of the Modernist period in art and culture. However, it is just a state beyond consciousness where one believes to be at his best. Miró then applied the various motifs, which lack any association whatsoever, to form a consistently illogical masterpiece. 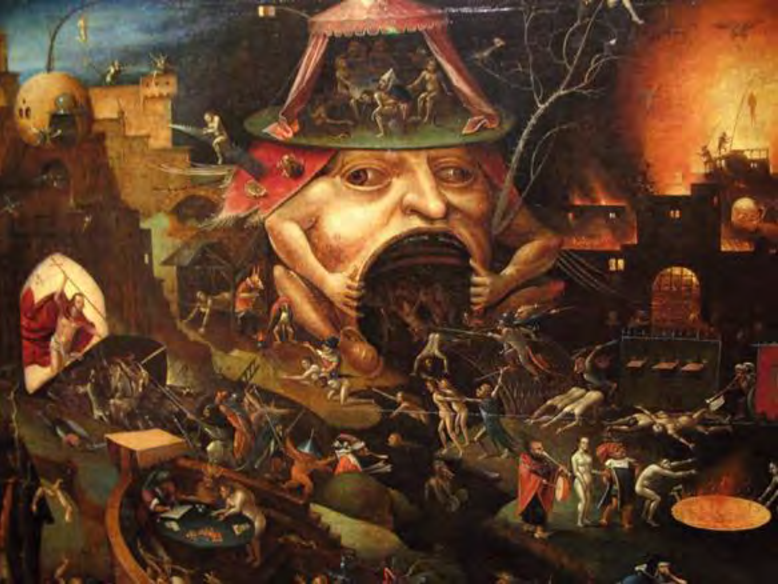 When Breton met Kahlo in Mexico in 1938, he was immediately drawn to her deeply personal and painful art. Likewise, the slippery, metaphysical wastelands painted by Yves Tanguy inform the graphic art of the 1980s, which is so closely linked with the dawn of the digital era. A dream is a continuation of reality, but an objective reality, which is not imposed by certain ideas of consciousness and not constrained by the Super-Ego or the so-called censorship of consciousness. In fact, the only truly recognisable organisms in the painting are the birds. At the beginning of the 20th century, surrealism was born in France. He also met two men who were to become his mentors — Guillaume Apollinaire and Jacques Vache. In this way the painted work is coupled with an ensemble of texts that enlighten it and that make at the same time of Kandinsky one of the major theorists of the art.

Surrealism and the Subconscious 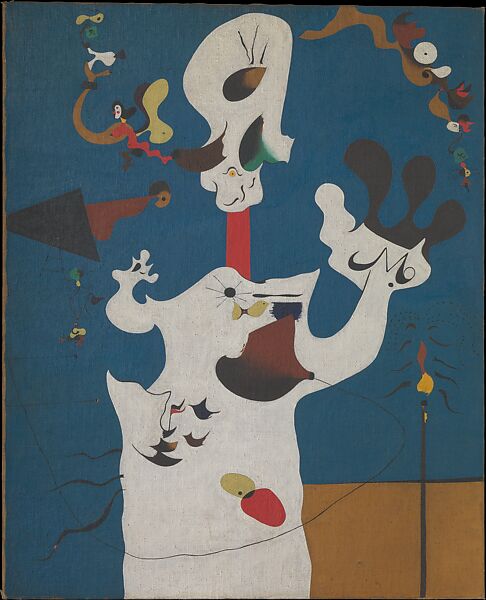 Besides, there have been instances where people regard this high state as a feeling or emotion. The surrealism and expressionism of Miro and Kandinsky reflected their avant-garde tendencies. René Magritte, The Treachery of Images. According to the Laws of Chance by Jean Hans Arp , 1933, via Tate, London Dada, or Dadaism , was an absolute rejection of any standard in art. Consequently, both transcendence and surrealism share a deep relation. 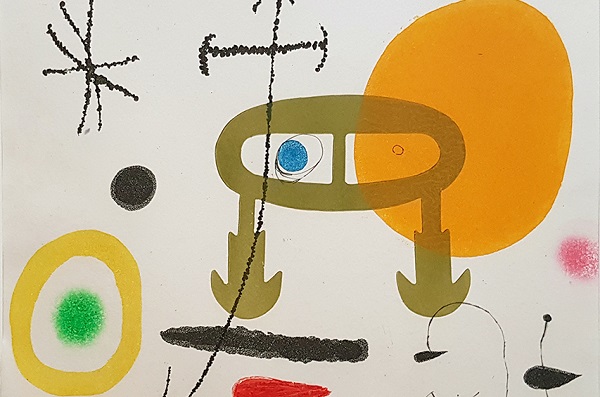 As a result, artists like Frida Kahlo, Pablo Picasso, and Salvador Dali have influenced society with their surrealistic artworks. Surrealists see real art in the rejection of their own conscious thought, because thought is subjective, and art should be, on the contrary, objective. Sonata II, to Composition IV etc. The following works can be seen as comparative works namely: compositions, The use of colors like: yellow, blue, red and green in contrasting and bright shades made the two painters parallel with each other, as they present their themes and tonality of their work. F ew art movements have been as influential and expansive as Surrealism.

Surrealism And Transcendence: A Subconscious Breakthrough 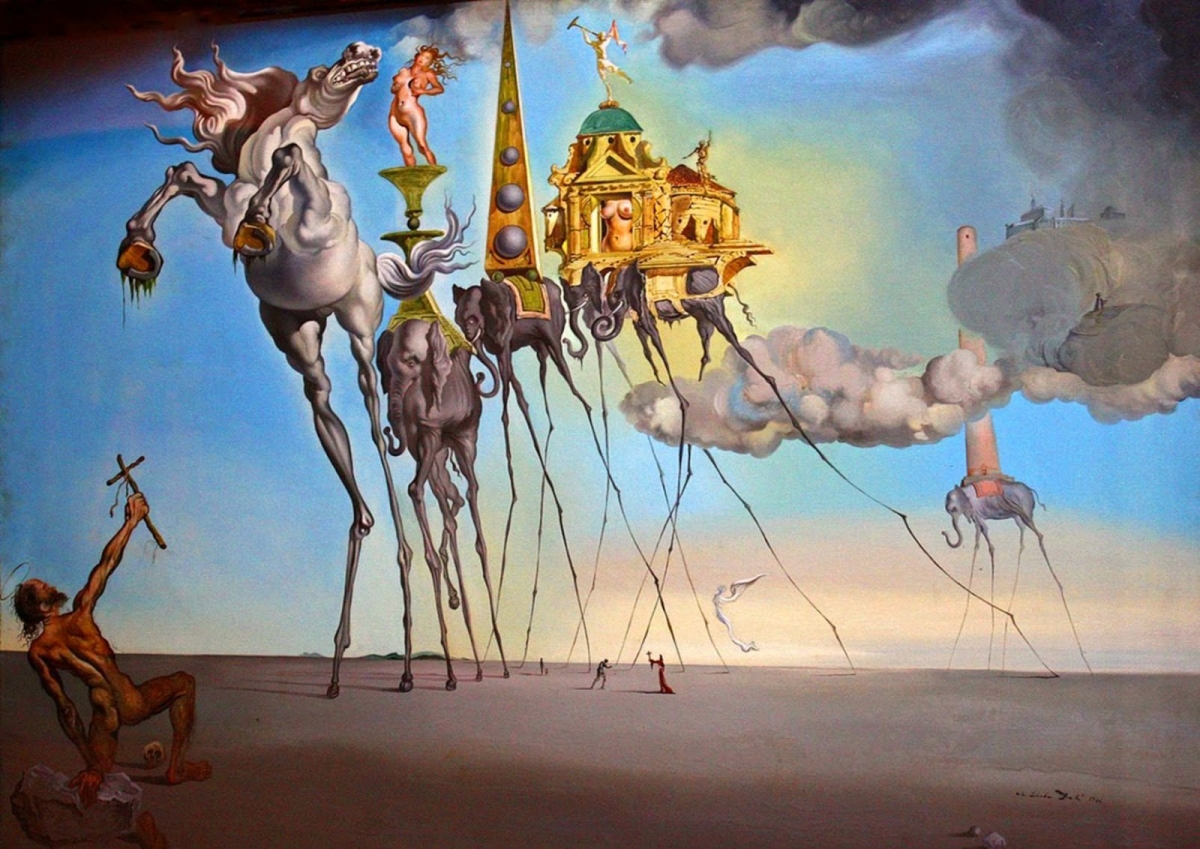 I never painted dreams. While the countercultural sensibilities of the 1960s have a clear connection to Surrealist mind-expansion, the visual lexicon forged by the group is embedded in less obvious settings. Note that, many if not all of the titles of his art works are titled almost same way with musical compositions e. Surrealism definition: what is Surrealism? In this article, we will figure out how to understand that you have the work of a surrealist in front of you, what is known from the history of surrealism, and who are its prominent representatives. This direction brought a fresh look at art and did not go unnoticed.

A Short History of Surrealism The latter was influenced by another art medium—music as he geared toward the perfection of his craft, while Miro, further expressed the various mode of expressions, and stretching artistic imagination to the point of fantasy and unbelieavable. Besides, they also believed in the existential nature of spirituality and imagination beyond space and time. Give your creature a name. Surrealism had had political implications from its birth. What now was on show were the more mysterious aspects of living.

I am a self-taught guitarist with an interest in music theory and composition. Unlike many painters whose leaning toward the art was seen in much early years of their life, Kandinsky was already seasoned lawyer, teacher and musician when he entered formally the world of fine arts. In other words, is it just the differences concerning the path towards a single purpose? On the other hand, surrealism has been counterparted by abstract expressionism, where Wassily Kandinsky, a accomplished musician himself, made significant advances. The human mind, and the reason for human actions, began to take on the complexity of internal conflict and desire. While these art movements were certainly an avenue of peculiar expression in the sense that classical or romantic art had been farther stretched to the inner imagination, the use of these ideas were novel to the 20th century people. The experimentation and his advocacy towards new directions in artistic expression shall be hallmarks of 20th century creativity. The works like Ravine Improvisation 1914 and Composition IV 1913 and all other works in this collection are descriptions of various colors, integration, and concentration to the middle, almost musical in its vividness, comparable to Small Pleasures, Fragment 2 for Composition VII.