Sikhism and Hinduism are two religions that originated in the Indian subcontinent. Both religions share many cultural and historical traditions, but they also have some significant differences.

One key difference between Sikhism and Hinduism is their respective founders. Sikhism was founded by Guru Nanak, who was born in the 15th century in the Punjab region of India. Hinduism, on the other hand, has no single founder and is a collection of diverse beliefs and practices that have evolved over thousands of years.

Another key difference between the two religions is their respective beliefs about the nature of God. In Sikhism, God is considered to be a single, all-powerful and all-knowing being who is the creator of the universe. Hindus, on the other hand, believe in a pantheon of gods and goddesses who represent different aspects of the divine.

Sikhs also place a strong emphasis on the concept of equality and social justice, and reject the caste system that is prevalent in Hinduism. In Sikhism, all people are considered equal in the eyes of God and should be treated with respect and dignity.

Both Sikhism and Hinduism also have their own sacred texts and scriptures. The Sikh holy book is the Guru Granth Sahib, which contains the teachings of the Sikh Gurus and other spiritual figures. The Hindu scriptures include the Vedas, Upanishads, and the Bhagavad Gita.

Sikhism and Hinduism also have their own places of worship. Sikhs go to gurdwaras, which are places of worship for Sikhs, to offer prayers and seek guidance from the Guru Granth Sahib. Hindus go to temples to worship their gods and goddesses and to seek blessings.

Despite these differences, there are also many similarities between Sikhism and Hinduism. Both religions believe in reincarnation, the cycle of birth, death, and rebirth, and the concept of karma, the law of cause and effect. Both religions also place a strong emphasis on spiritual discipline and personal growth, and believe in the power of meditation and prayer to help people achieve a deeper understanding of the divine.

In conclusion, while Sikhism and Hinduism have many differences, they also have many similarities. Both religions originated in the Indian subcontinent and share many cultural and historical traditions. However, they have different founders, beliefs about the nature of God, and sacred texts, and they have their own unique places of worship. Despite these differences, both religions believe in the importance of spiritual discipline and personal growth, and the power of meditation and prayer to help people achieve a deeper understanding of the divine. Sikhs take after the statutes of confidence that were advanced by Guru Nanak Dev Ji, who was conceived in Talwandi, Northern India, in 1498 Nyokabi. Hindu women never wear turbans. This emphasis on equality between genders among Sikhs allows for both men and women to lead worship and contribute equally to religious affairs. Guru Sahib Ji made people of different provinces and castes take Khande Baate Da Amrit from all over India and then revealed the Khalsa Panth like pure ghee. Imagine a life without garbage men. We follow Sikhism and Hinduism with equal zeal.

Sikh vs Hindu — 2 Similarities and 7 Differences

Being the oldest religion of India it is considered building block for those that which have followed. The second was the rural base of Punjabi society. This has become quite controversial because it is very misunderstood. Differences and similarities existed in the forms of the role of migration, role of trade, role of cultural exchange, methods of conversion to Islam, and the unique cultural developments in each region. E although in some cases is thought to be legend 244. The Sikhs' standardized appearance was initiated by Guru Gobind Singh, the tenth guru, in order to keep his followers accountable so that they are more likely to abide by a high moral standard. In the final battle of Panipat between Marathas and Ahmad Shah Abdali Afghan rulers, you brave sikhs were mere spectator waching like India Pakistan match.

Comparison Between Hinduism And Sikhism

How does Hinduism compare to Christianity? Religion plays a crucial role in the daily lives of millions of people. Then What is the difference? In Sikhism, marriage is considered to be a holy union among the souls where the partners are equal to each other, and the dowry system is off the table. Menstruation Across Cultures: the Sabarimala Confusion, a Historical perspective. He was True in the beginning, He was True when the ages commenced and has ever been True, He is also True now. Sikhs do not believe that Jesus is God because Sikhism teaches that God is neither born, nor dead.

A Comparison of Sikhism and Hinduism 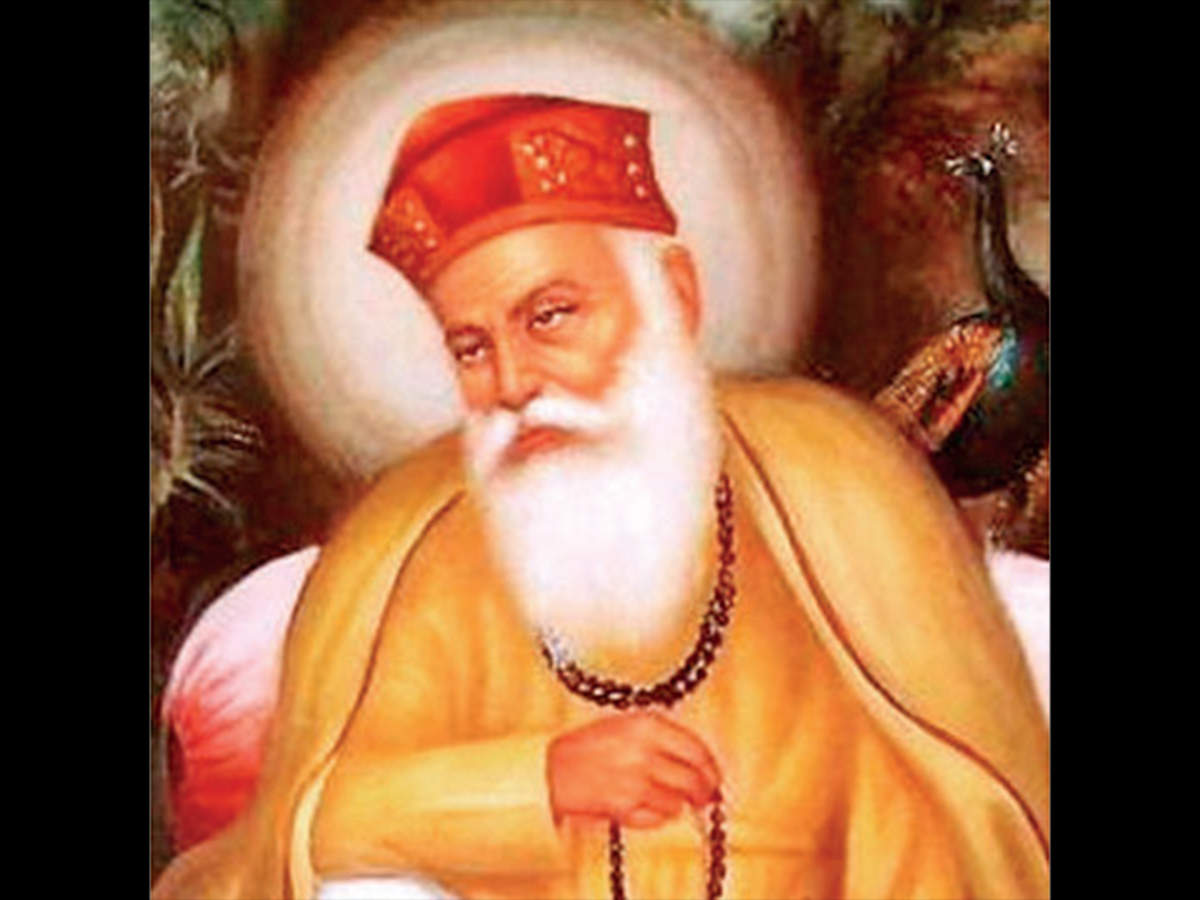 Worship God, do Good Deeds in the name of God, performing service for community. Sikhs Across Borders: Transnational Practices of European Sikhs. Sikhism on the other hand, is a monotheistic religion founded in the 15th century in India Punjab region. The Status and Role of Women in Hinduism and Sikhism Renee Thompson 996976438 Professor Shiu Monday July 4th, 2011. In Hinduism, What is Sikhism? Hinduism, Islam and Sikhism: A Comparative Study. There they serve free food for up to 100,000 people every day. After twelve years of meditation and extreme sacrifice it is said that Mahavira had a spiritual awakening.

Difference Between Hinduism and Sikhism 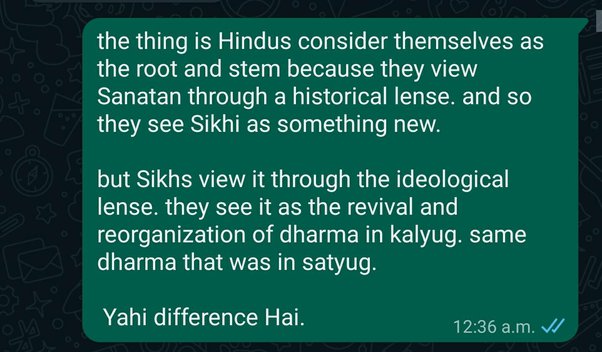 Though it is important that a child is happy with their life partner, the parents, early on in life, arrange most Hindu marriages. Sikhs learn about God through the teachings of Guru Nanak and the nine Sikh Gurus who came after him. Confessing sins Repentance for unintentional sins are prescribed, but intentional sins have to be repaid through karmic consequences. Women having menstruation are not allowed to take part in religious activities or rituals as they are considered to be impure during their cycle. Oxford, UK: Oxford University Press. Place of origin Indian Subcontinent Punjab, in an area which was partitioned into modern-day Pakistan. In contrast to Hinduism, Buddhists do not worship any gods, though they view the Buddha as the most significant person within their religion. 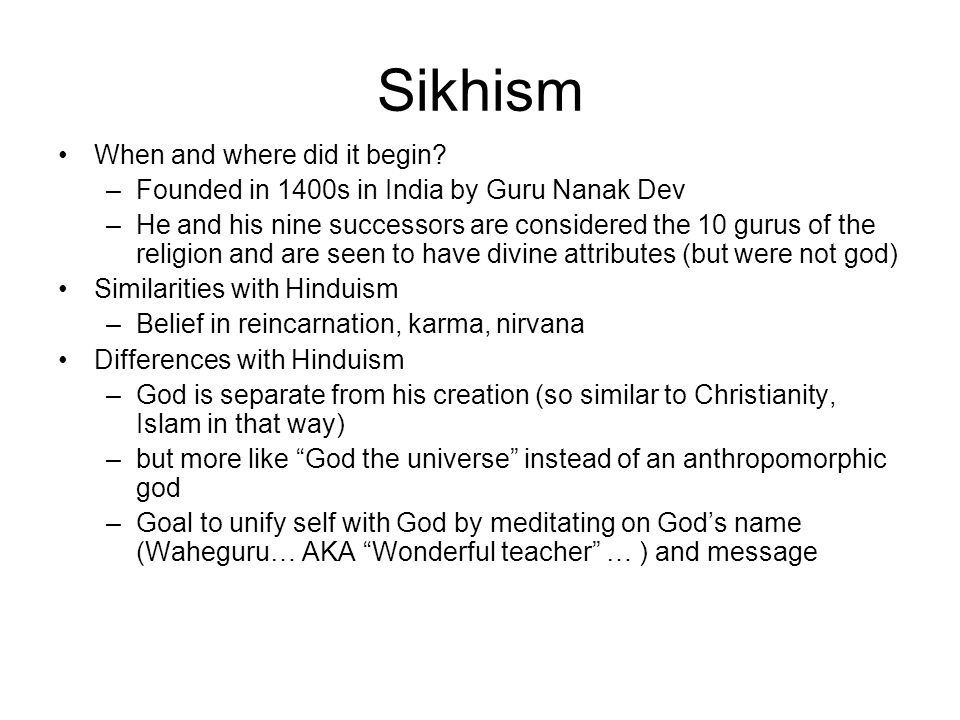 Sikhism does not effectively look for changes over, but rather acknowledges anybody, paying little mind to social foundation, who wishes to be started whereas Hinduism depends on an unbending position framework which one must be naturally introduced to, however can neither wed to wind up, nor change over to Khalsa. The last one proclaimed the Guru Granth Sahib is the Holy Scripture. He then leads the bride and groom to seven significant steps around the fire. Their religious relationship is somewhat like father and estranged son. They may better educate themselves not only in the religious texts, such as the Vedas, but in social inclement and activities as well. How Do Sikhs and Hindus Get Along? Some may never reach the afterlife of Nirvana and will be stuck in a constant state of rebirth.

A Comparison of Sikhism and Hinduism Essay

Men wear kurta pajama and women salvar kamees. As both of them appear a bit similar, they are very different. Sikhs respect the works and lessons of Guru Nanak Dev Ji, which are alluded to as Guru Granth Sahib, as the hallowed writings that god furnished to lead them to closeness with him Nyokabi. A Kshatriya is given the duty to protect the kingdom and is considered the king. Scientific Bases of Hindu Beliefs. It is a mix of all different beliefs. In general though, Sikhs and Hindus have always co-existed peacefully. 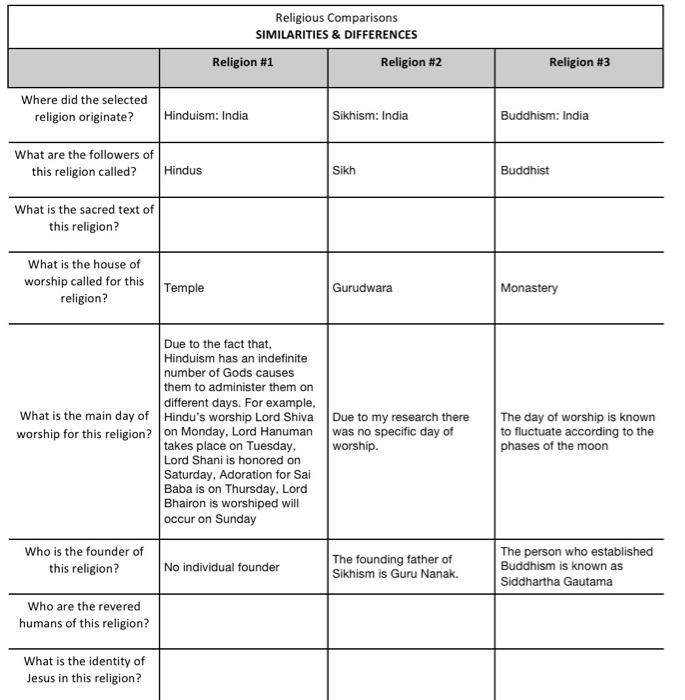 Understanding Sikhism — the Research Journal. Oxford, UK: Oxford University Press. It is very common for Hindus to use images or statues to facilitate worship. The third significant element was that period of Punjab history during which Sikhism evolved in tension with Mughals and Afghans in the 17th and 18th centuries. World Religions Salvation and Moksha Compared in World Religions Russell F. Islam is an Abrahamic religion founded in the Arabian Peninsula, while Sikhism is a Dharmic religion founded in the Punjab region of the Indian subcontinent. There are no religious laws unlike Hinduism, just three rules to which a Sikh should live their lives.

Was sikhism influenced by hinduism? Explained by FAQ Blog 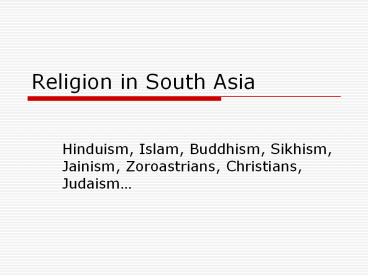 Though the government tried to hurt him, he never hurt them back. Hindu goddesses: beliefs and practices. It helped to endorse the renewal of the management team, the first stage took place at the 18th Congress of the Chinese Communist Party, which was held in Beijing from 8 to 14 November 2012. Voice of India, Delhi 1985. Raagi who sings the Granth Sahib Baani in Respective Raagas. Theravada, meaning elders, follows the ways of the past and original teachings of Buddha without change. They call only for moderation when eating and in choice of food.