William Shakespeare's play "King Lear" is a tragic tale of a once-great king who makes a series of terrible mistakes that lead to his downfall and the destruction of his kingdom. The play features a cast of complex and multifaceted characters, each of whom plays a crucial role in the unfolding drama. In this essay, we will take a closer look at some of the key characters in "King Lear" and explore their motivations, actions, and relationships with one another.

King Lear is the titular character of the play, and he is a powerful and influential figure in the kingdom of Britain. At the beginning of the play, he is an aging monarch who decides to divide his kingdom among his three daughters, Goneril, Regan, and Cordelia. However, he makes the mistake of basing his decision on which daughter loves him the most, rather than on their merit or loyalty. This leads to tragedy, as Goneril and Regan are both deceitful and manipulative, and they eventually turn against their father and each other. Despite his flaws, however, Lear is also a tragic figure who ultimately learns from his mistakes and comes to understand the error of his ways.

Goneril and Regan are Lear's two eldest daughters, and they are both ambitious and ruthless. They are willing to do whatever it takes to gain power and favor, including lying, scheming, and even committing murder. Goneril is married to the Duke of Albany, and she uses her position to try to undermine her sister and win her father's favor. Regan, meanwhile, is married to the Duke of Cornwall, and she is equally determined to assert her own power and influence. Both sisters are ultimately undone by their own greed and ambition, and they meet tragic ends as a result of their actions.

Cordelia, on the other hand, is Lear's youngest and most honest daughter. She refuses to flatter her father or compete with her sisters for his favor, and as a result, he disinherits her. Despite this, Cordelia remains devoted to her father and is willing to do whatever it takes to help him, even if it means sacrificing her own happiness. She eventually marries the King of France and becomes a powerful ally for Lear, but her loyalty and love are not enough to save him from his own mistakes.

The Earl of Kent is another important character in "King Lear." He is a loyal and honest servant to Lear, and he tries to warn him of the dangers of dividing his kingdom among his daughters. When Lear banishes him for speaking out, Kent disguises himself and continues to serve the king in secret, eventually revealing his true identity and reconciling with Lear before his death. The Fool is another loyal servant to Lear, and he uses his wit and humor to try to counsel the king and help him see the error of his ways. However, like Kent, he is ultimately unable to prevent Lear's tragic downfall.

Finally, the Duke of Gloucester is a secondary character in "King Lear," but he plays a significant role in the story. He is a nobleman who is loyal to Lear, but he is also blinded by his own ambition and makes a series of poor decisions that ultimately lead to his own ruin. His two sons, Edgar and Edmund, are also important characters in the play. Edgar is the legitimate son of Gloucester, but he is falsely accused of plotting against his father and must flee for his life. Edmund, on the other hand, is the illegitimate son of Gloucester and is determined to claim his inheritance at any cost. He is a cunning and manipulative character who is willing to betray anyone, including his own father, to achieve his goals. 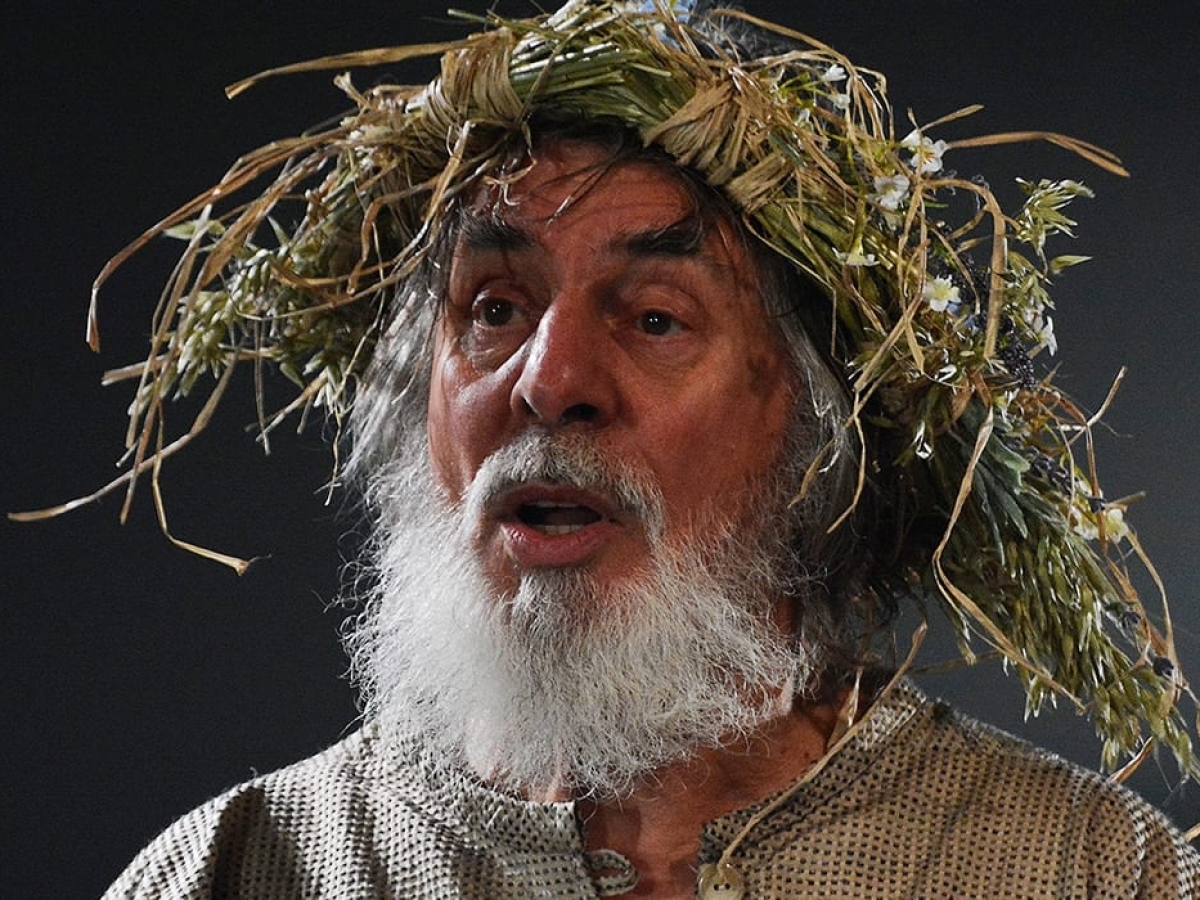 Retrieved 5 February 2021. Marsden cites Gray's Inn Journal 12 January 1754. She plans with her sister Regan to make their father more manageable, and callously leaves him to himself when he rushes out into the storm. Before his two elder daughters leave the room, they are already laughing at his stupidity. In Aspects of King Lear. A Companion to Shakespeare and Performance. This activity can be found on page 8 and takes approximately 20 minutes. 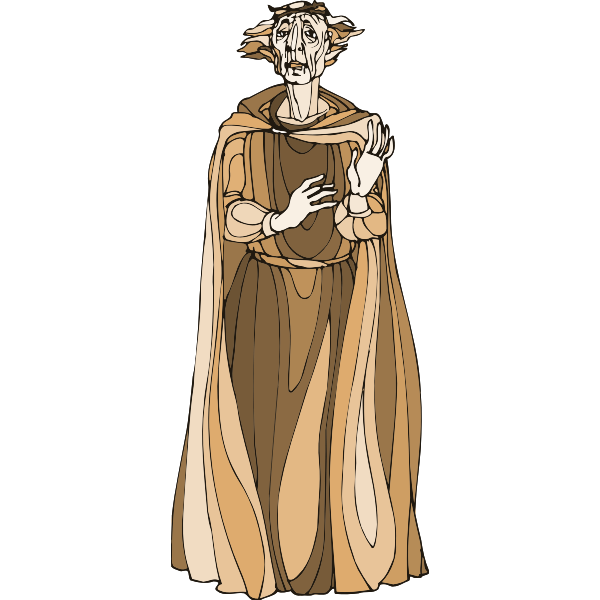 In the 1604 elections to the House of Commons, Just as the House of Commons had argued to James that their loyalty was to the constitution of England, not to the King personally, Kent insists his loyalty is institutional, not personal, as he is loyal to the realm of which the king is head, not to Lear himself, and he tells Lear to behave better for the good of the realm. Retrieved 17 March 2021. For this loyalty, Regan and her husband, Cornwall, put out his eyes in a disturbingly cruel scene. This statement shows how he feels like all illegitimate children are overlooked and victims of neglect by their biological parents and the society they are living in. He explodes in anger, instantly banishes her, and threatens anyone who tries to help her. She is married to the Duke of Albany and does not yet seem to have any children. 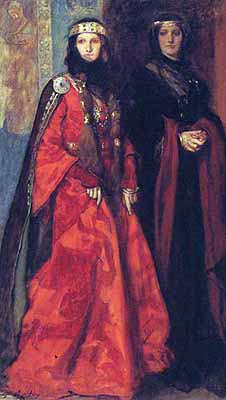 Edmund, however, also promises his love to Regan. Though she advises Cordelia to obey her husband in all things, she despises her own husband as a weakling, and is not shy about reminding him that hers is the royal blood, not his, and that all of his authority was acquired by marrying her. Edgar is horrified to see his father being turned out of his own home after having his eyes gouged out. That we our largest bounty may extend where nature doth with merit challenge. They send him out of their houses in a state of half-madness with only his most loyal servants to protect him. 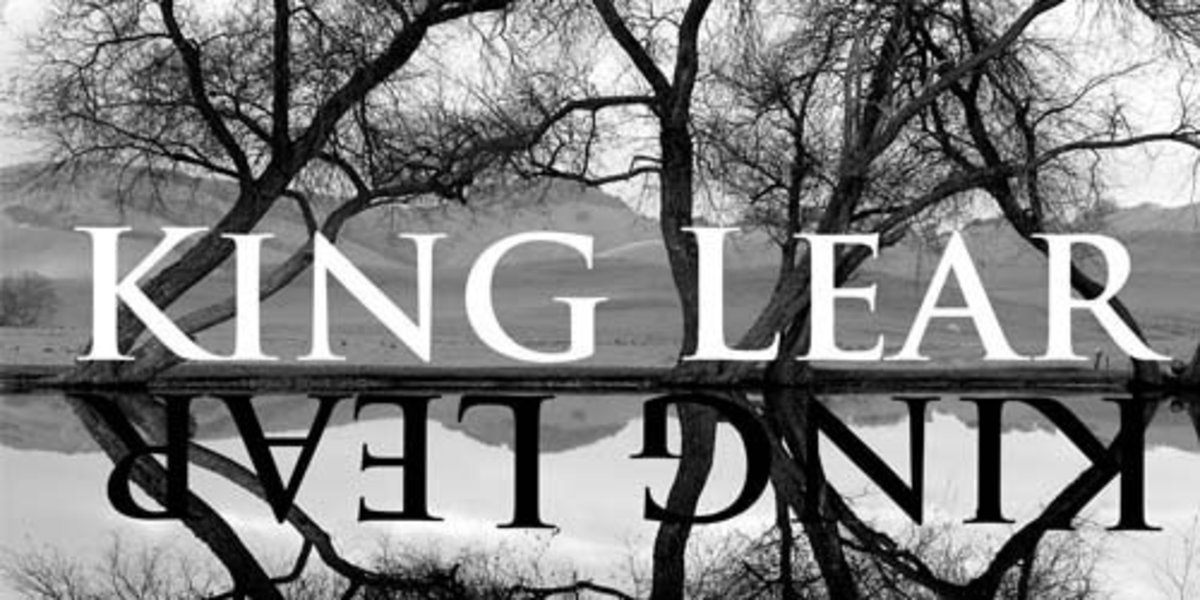 Le Roi Lear Au Village, and in 1914 in America, Ernest Warde expanded the story to an hour, including spectacles such as a final battle scene. Ultimately, Albany becomes king of Britain after his wife's death. Regan is notably masculine, like her elder sister; when Cornwall is wounded by a vengeful servant, Regan grabs a sword and kills the servant. The imagery of the play is important in advancing its themes. Does Lear walk thus? She is rewarded with a third of the kingdom and, when her youngest sister Cordelia is disinherited, she rules half the kingdom alongside Goneril. Moved by her flattery, Lear proceeds to grant to Goneril her share as soon as she has finished her declaration, before Regan and Cordelia have a chance to speak. 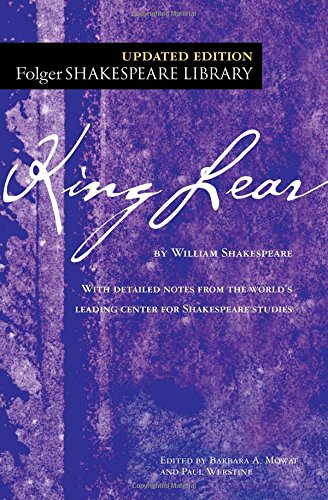 The first scene of the play sees Gloucester gently teasing his bastard son Edmund about his illegitimate status; it later becomes clear that this is a real source of shame for Edmund, underscoring the vulnerability and accidental cruelty inherent in familial relationships. The Earl of Gloucester and the Earl of Kent observe that, by dividing his realm between Goneril and Regan, Lear has awarded his realm in equal shares to the peerages of the Duke of Albany Goneril's husband and the Duke of Cornwall Regan's husband. The Canadian comedy-drama TV series King Lear. In many ways, the play is a family drama, as Lear and his three daughters, Cordelia, Regan, and Goneril, navigate the issue of succession. Though presently at court, he has been away for nine years, and his father intends him to leave again soon. 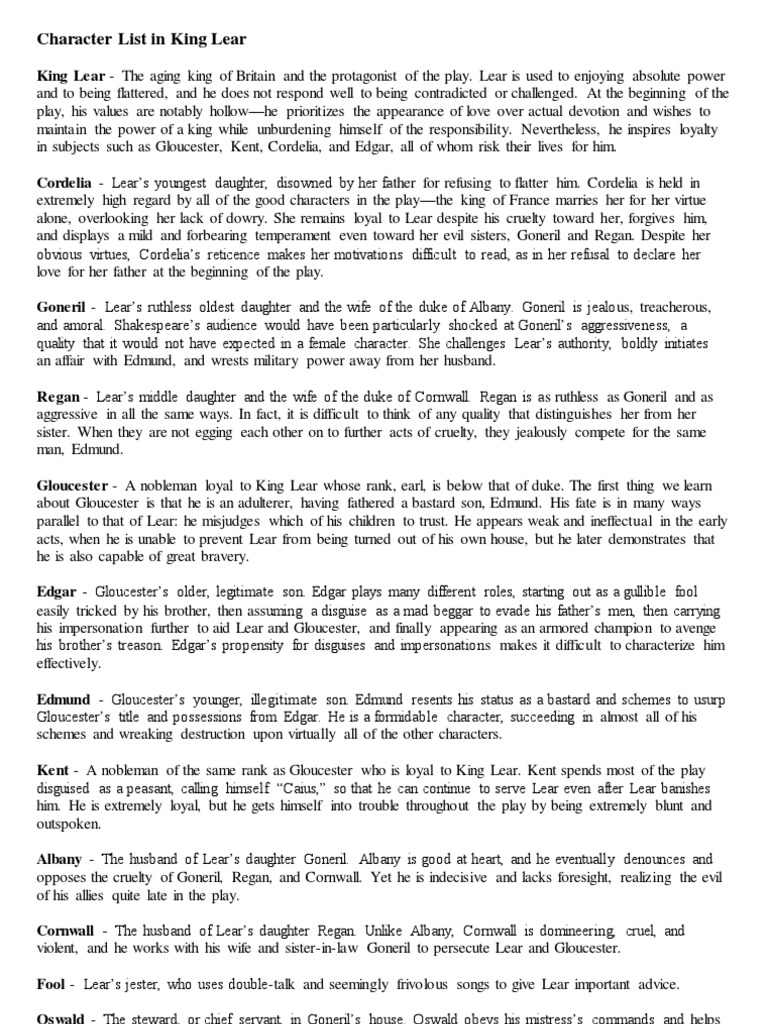 King Lear and the Naked Truth: Rethinking the Language of Religion and Resistance. Kent stays loyal to Lear during the storm and helps Lear to escape to Dover. At the end of the play, Albany confronts her about her plot to have him killed, and she flees, killing herself offstage. She appears at the beginning of the very long play and then again at the end. Women in Culture and Society. 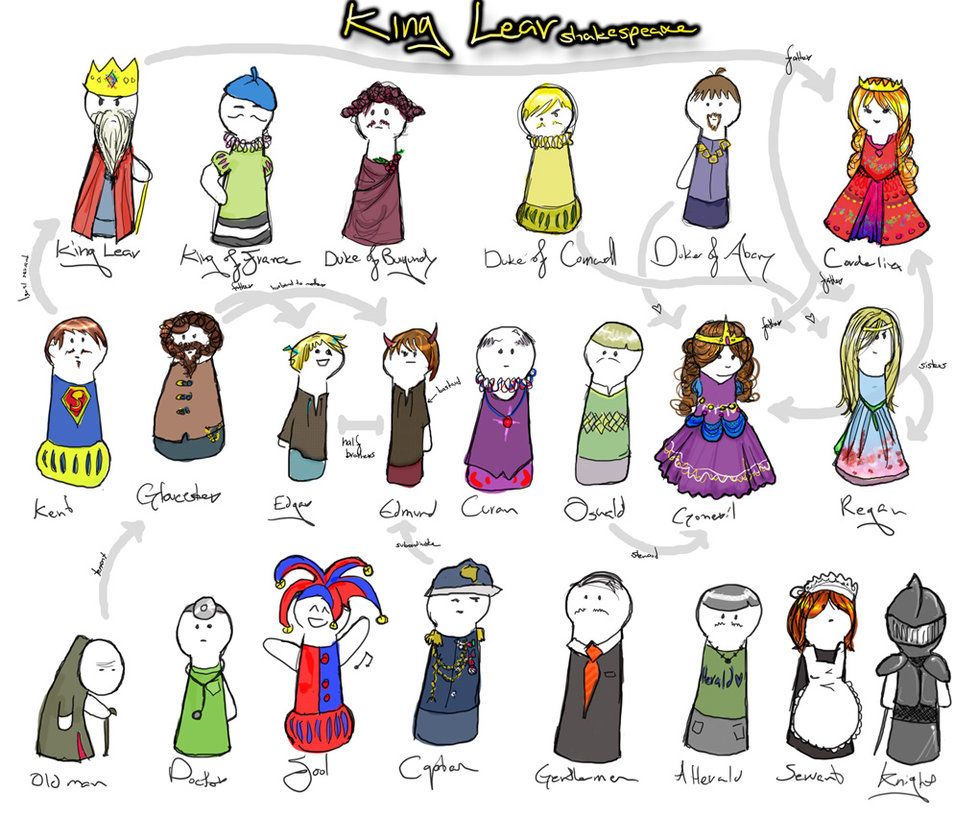 But the Edmund party carries bold rationalism to such extremes that it becomes madness: a madness-in-reason, the ironic counterpart of Lear's "reason in madness" IV. Periods of lucidity are not uncommon among dementia patients. Kent declines, explaining that his master is calling him on a journey and he must follow. New Haven and London: Yale University Press. Goneril's suspicions about Regan's motives are confirmed and returned, as Regan rightly guesses the meaning of her letter and declares to Oswald that she is a more appropriate match for Edmund. When Lear arrives, he objects to the mistreatment of his messenger, but Regan is as dismissive of her father as Goneril was. He is a formidable character, succeeding in almost all of his schemes and wreaking destruction upon virtually all of the other characters. 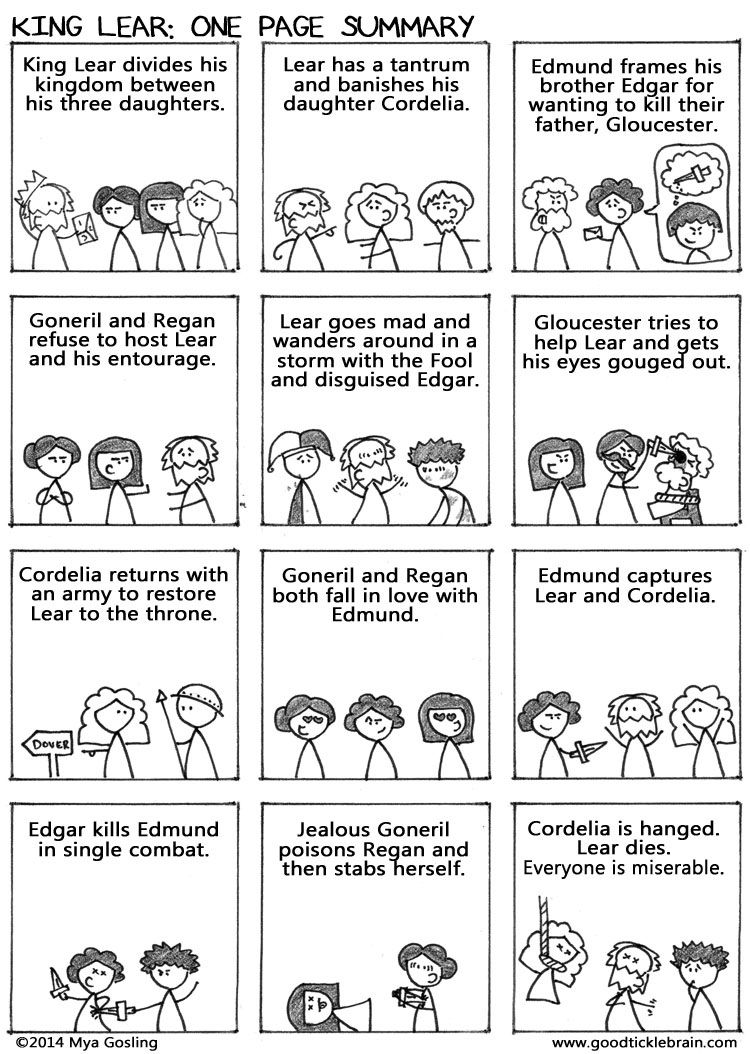 She openly claims Edmund for her husband on the field of victory, but too late, and discovers that he has been double-crossing her with her sister. Many of the biological parents of illegitimate children feel obligated to take them in, just as Gloucester did with Edmund in King Lear. He is going to divide his kingdom into three parts and award the sections of it to his three daughters, each one receiving her portion according to how much she loves him. In The Cambridge Companion to Shakespeare on Stage. After Lear is rejected by Cordelia's sisters, Goneril and Regan, he goes mad.

Cambridge: Cambridge University Press. He insults them and curses them. When the Fool follows Lear into the storm, a more serious side of the Fool is revealed: he is extremely loyal to his king despite his flippant attitude. Retrieved 3 June 2022. As a character, Cordelia is too good to be true. Lear is used to enjoying absolute power and to being flattered, and he does not respond well to being contradicted or challenged. He is a captive of nature and his own nature. 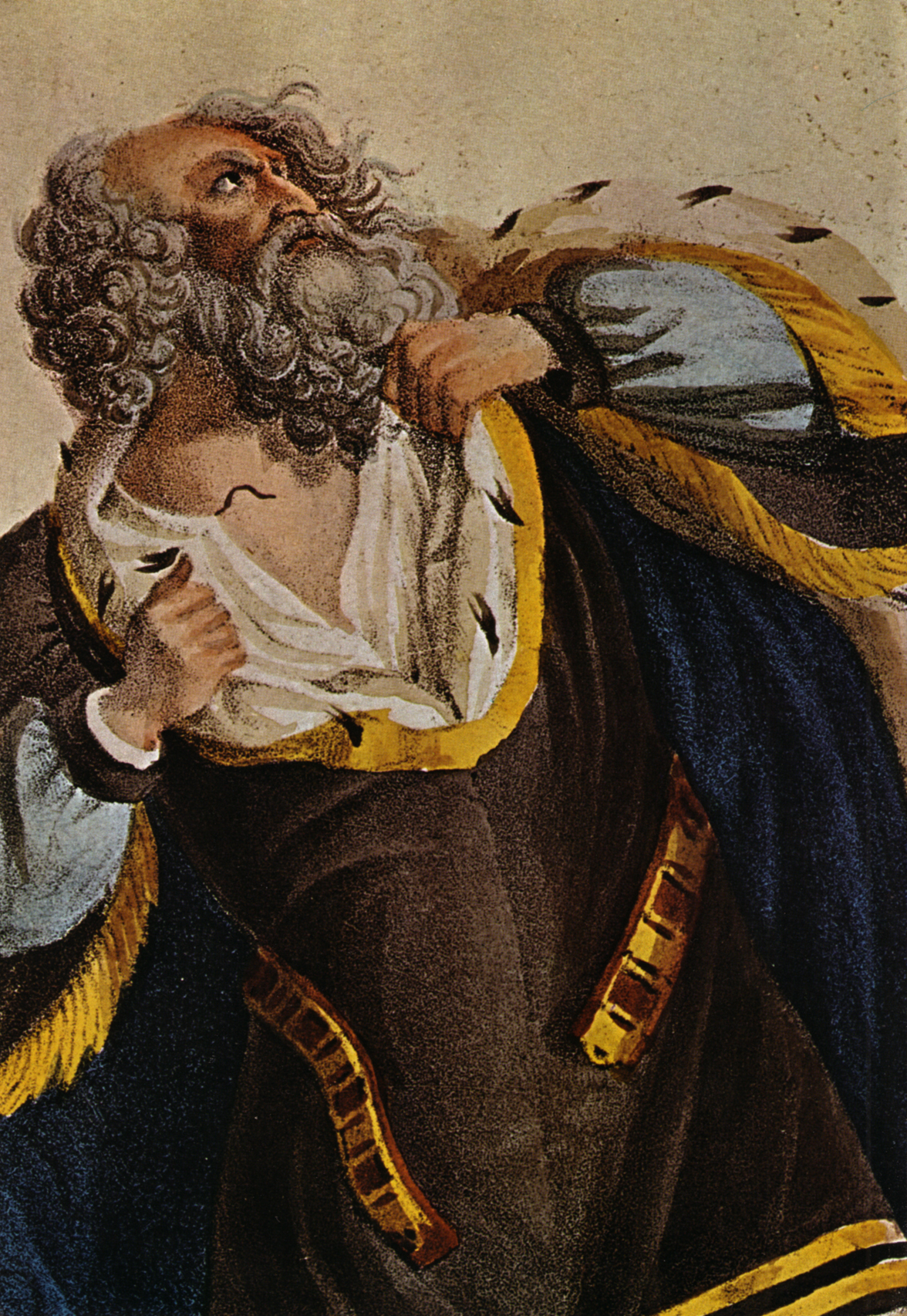