Routine activities theory is a sociological theory that explains the relationship between opportunities for crime and the occurrence of crime. It suggests that crime is more likely to occur when three elements are present: a motivated offender, a suitable target, and the absence of a capable guardian. This theory was developed in the 1970s by Marcus Felson and Lawrence E. Cohen, and it has become a popular and influential approach to understanding crime and deviance.

According to routine activities theory, crime occurs when an offender with the motivation to commit a crime comes into contact with a suitable target in the absence of a capable guardian. The motivated offender could be anyone with the desire to commit a crime, whether it be for personal gain, thrill-seeking, or some other reason. The suitable target is an attractive object or person that is relatively unprotected and easy to access. This could be a valuable item left out in the open, or a person who is alone and vulnerable. Finally, the absence of a capable guardian refers to the lack of supervision or protection that could prevent the crime from occurring. This could be a lack of security measures or the absence of a responsible adult.

Routine activities theory has been used to explain a wide range of crimes, including property crimes, violent crimes, and white-collar crimes. It is particularly useful in explaining crimes that occur in urban settings, where there are many opportunities for motivated offenders to come into contact with suitable targets and where the absence of capable guardians is more common.

One of the key contributions of routine activities theory is its focus on the role of opportunity in crime. Rather than looking at individual traits or characteristics as the main cause of crime, this theory emphasizes the importance of the social and physical environment in facilitating or preventing crime. This means that crime can be reduced or prevented by altering the opportunities for crime, rather than focusing solely on changing the characteristics of the offender.

There are several implications of routine activities theory for criminology and crime prevention. For example, this theory suggests that increasing the presence of capable guardians can reduce the likelihood of crime. This could include increasing the number of police officers on patrol, increasing the use of security cameras, or simply increasing the presence of responsible adults in an area. Additionally, this theory suggests that reducing the availability of suitable targets can also reduce the occurrence of crime. This could include securing valuable items, improving the design of buildings to make them less vulnerable to crime, or simply making it more difficult for motivated offenders to access potential targets.

Overall, routine activities theory is a useful and influential approach to understanding crime and deviance. Its focus on opportunity and the role of the social and physical environment in facilitating or preventing crime has important implications for criminology and crime prevention. By altering the opportunities for crime, it is possible to reduce the occurrence of crime and improve public safety. 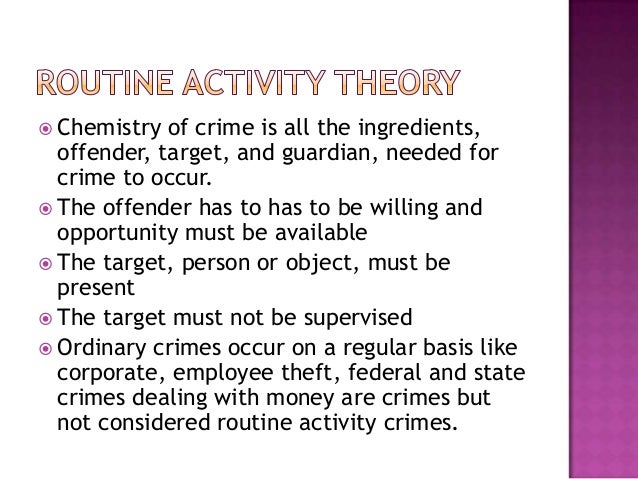 The final key element is the absence of a capable guardian Cohen and Felson 1979. Instead, Sherman, Gartin, and Buerger argue, there are certain types of areas where crime is distributed, and the types of areas that experience crime can even vary from block to block. Felson, Marcus; Cohen, Lawrence E. It is a complex and very difficult definition to agree upon because there are many points of view and controversies in defining what crime is. Using the RAT, it is possible to define these programs as online versions of physical convergence in time and space, a factor that creates an environment of an offense to happen.

What is an example of routine activities theory?

What is an example of a capable guardian? Lifestyle exposure theory posits that persons with certain demographic profiles are more prone to experience criminal victimization because their lifestyles expose risky situations. Thousand Oaks, CA: Pine. I love to write and share science related Stuff Here on my Website. The theory notably assumes that anyone with the opportunity to commit a crime, can do so. The ubiquity of the Internet has ushered in opportunities for online criminality.

What is routine activities theory in criminology? Regional differences play a substantial role in predicting who will be a victim of a crime and which environment is the most impactful. So summing up, it became easier to commit crime, because there were fewer people watching fewer guardians and, simultaneously, there was more to steal, namely more suitable targets. Felson viewed crime as an event that happened in a specific location and included an offender, suitable target, and the absence of a guardian that could When the offender and the suitable target crossed paths without one of these guardians present than the potential for a crime to occur increases Routine. Routine activities refer to generalized patterns of social activities in a society i. Either way, the maintenance of constant surveillance can engender social order and discourage crime. The susceptibility of a target depends on how well it can be taken and concealed and its value relative to its concealability. By analyzing crime data from the communities of South Africa, the authors come to several conclusions. 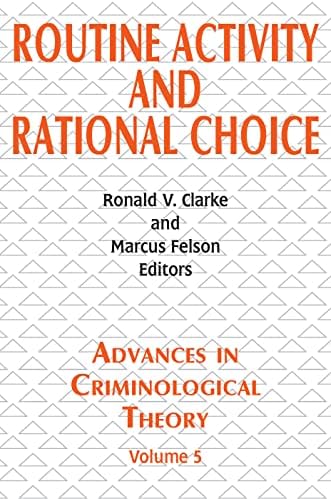 Finally, the burnout or maturity phase of the criminal lifestyle changes the incentive to the fear of death, illness, or incarceration Walters, 2006. Examples Sherman, Gartin, and Buerger 1989 analyzed calls to police in Minneapolis, Minnesota, identifying the 3% of places in the city where 50% of all calls to the police occured. Coming from a research background in biology and archeology, Charlotte currently studies how digital and physical space shapes human beliefs, norms, and behaviors and how this can be used to create businesses with greater social impact. Residents will be more likely to prevent crime on their own street block, rather than on the blocks they travel to and from work. The eighth principle is that crime can be prevented by reducing the opportunity Felson 23. 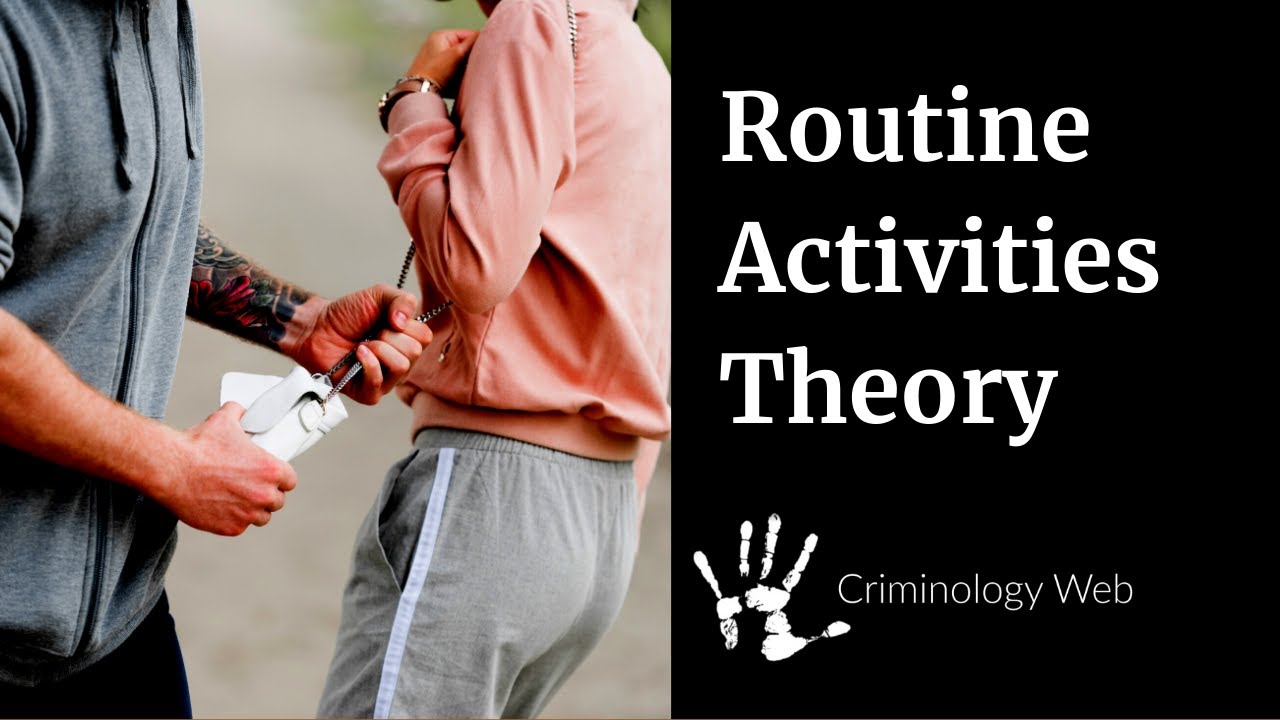 Hot spots of predatory crime: Routine activities and the criminology of place. Environmental criminology and crime analysis. My thesis aimed to study dynamic agrivoltaic systems, in my case in arboriculture. The role of the victim in provoking or encouraging criminal behavior. This type of either informal or formal guardianship can prevent wrongdoing even when a suitable target has been chosen by a motivated offender Nickerson, 2022.

What is the role of a guardian in the routine activity theory?

The authors note that the RAT is not wholly ineffective in preventing crimes. There are no set of circumstances in this view that will make an offender more or less likely to commit a crime except for those that make the offender more able to carry out his intentions Branic, 2015. So, on the whole, routine activities theory says that crime occurs when these three elements are present. Journal of Quantitative Criminology. Additionally, routine activities theory pays no heed to what might constitute an incentive for an offender Clarke and Cornish, 1985. Cohen, that focuses on situations of crimes e.

The Encyclopedia of Theoretical Criminology 1sted. New York, NY: Aldine de Gruyter. Capable guardians can prevent crime from occurring because they disrupt the convergence of motivated offenders and suitable targets; their presence makes it more difficult for criminal acts to occur Hollis et al. Why is the main reason why the crime index no longer included in the UCR? Instead, the theory focuses on victimization. Just as potential targets are not limited to people, potential guardians are not, either. The internet offers a slightly different context for routine activities theory. Schmalleger, 2009 For example, a young child steals a candy bar from the local convenience store, simply because he wants the candy bar; this is not a violent or large- scale criminal act, but is still a violation of the law. The situational context and the nature of the wrongdoing may determine the exact form of the suitable target. Whether people decide to commit crime depends on the other two elements, namely whether a suitable target and guardianship are present. Which of the following circumstances would prompt and offender to decide to forgo crime? What types of victims are there? All varieties of criminal behavior, including violence, theft, and drug offences, may be part of a generalized PBS, indicating that all forms of antisocial behavior have similar developmental patterns. The theory implies that a number of particular factors have to align in order for an offense to happen. The purpose of this paper is to explore local stakeholders' perceptions of poaching rules, and motivations for compliance and noncompliance, using focus groups and interviews in Namibia. The first of these trends was that of women entering the workforce in greater numbers following World War II. Suitable Target A suitable target could be either a person or property the motivated offender can readily identify and engage Nickerson, 2022; Miro, 2014. 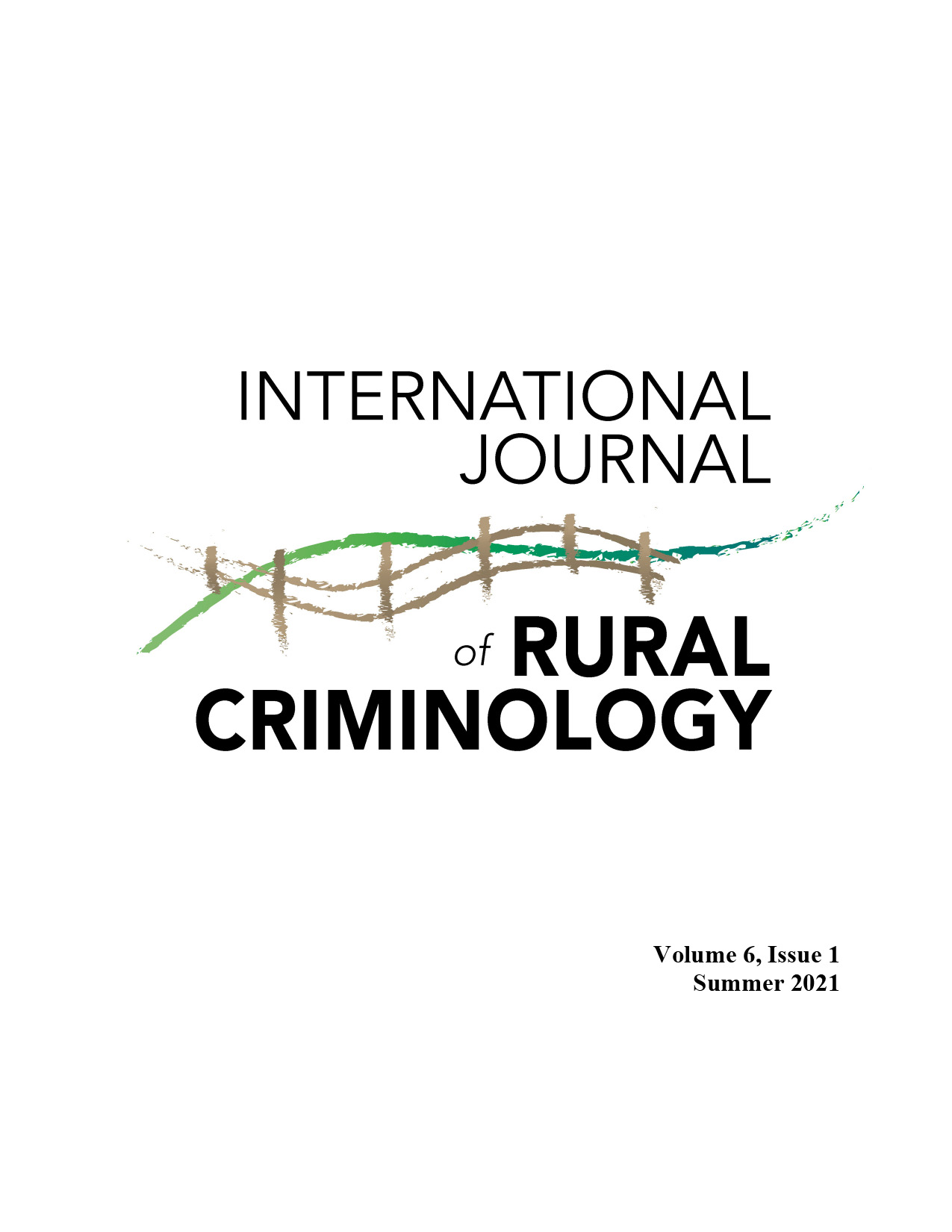 Each of these factors has an important influence on crime, the combination of these factors, as indications of lifestyles that may best explain criminal …show more content… An example of how someone could become a victim, using Routine Activities Theory would be: An individual that lived in a highly populated area, and worked a third shift job. Which of the following circumstances would prompt an offender to decide to forgo crime? Routine Activities Theory Autumn Eliason Keiser University CCJ1010- Criminology Michael Teague, MS September 16, 2011 Abstract This paper will define and explain the meaning of Routine Activities Theory. The product itself attracts the offender and it is the best location to reach their satisfaction Felson 19. In 1979, they published a now famous article where they proposed the central idea of the theory. Or some victims look like they might carry more valuable items and might therefore be more suitable targets. Cohen and Feelson observed that, over time, many expensive valuables such as televisions and computers reduced in size and weight, increased in monetary value, and were owned by more people. What are two differences between routine activities theory and lifestyle theory? This refers to a "multidisciplinary paradigm" for the study of people 's lives, structural contexts, and social change in which they find what are the causes and factors that go into the birth of criminal actions. 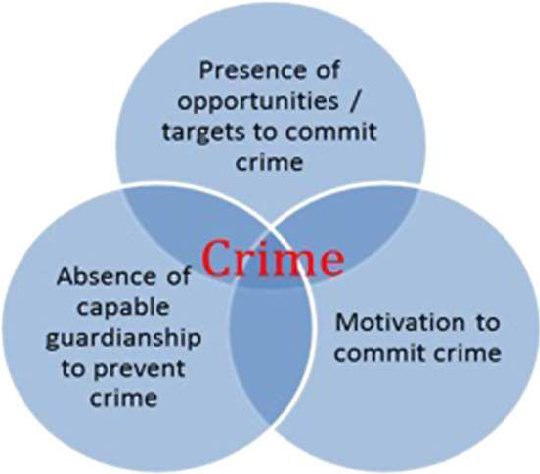 It is their assessment of a situation that determines whether a crime will take place. The encyclopedia of crime and punishment, 1-3. The developmental process and background of social process theories will be discussed in this paper. Five main types of human guardianship have been evaluated with experimental and quasi-experimental designs: security guards, urban citizen patrols, place managers, actively monitored closed-circuit television CCTV surveillance cameras, and neighborhood watch. Näsi, Matti, et al.