Neolithic art refers to the art produced during the Neolithic period, which lasted from around 10,000 to 3,000 BCE. This period saw significant developments in human society, including the transition from hunter-gatherer societies to agricultural ones, the development of new technologies, and the rise of complex social structures. These changes are reflected in the art of the time, which often depicted animals, natural scenes, and everyday life.

One of the earliest examples of Neolithic art is the paintings and engravings found in the Lascaux caves in France. These works, which date back to around 15,000 BCE, depict a variety of animals, including horses, bulls, and deer, as well as abstract shapes and patterns. The paintings are thought to have had a ritual or spiritual significance, and may have been used in hunting or fertility rites.

Other notable examples of Neolithic art include the statue of the "Venus of Willendorf," a small stone figurine found in Austria that dates back to around 25,000 BCE. The figurine, which depicts a pregnant woman with exaggerated sexual characteristics, is believed to have had a fertility or motherhood-related significance. Similarly, the "Mother Goddess" figurines found in various locations around the world, including the Near East and Europe, are thought to represent the feminine divine and may have been used in rituals related to childbirth and fertility.

In addition to sculptures and figurines, the Neolithic period also saw the development of pottery, which was often decorated with geometric patterns and images of animals and plants. These designs were likely influenced by the natural surroundings and the daily lives of the people who made and used the pottery.

As agriculture became more prevalent during the Neolithic period, so too did the production of textiles, which were often decorated with intricate designs. These textiles, which were made using techniques such as weaving and embroidery, were used for clothing, blankets, and other practical purposes. However, they also had a decorative and symbolic value, and may have been used in rituals or ceremonies.

Overall, Neolithic art reflects the major changes and developments that took place during this period in human history. It is a testament to the creativity and ingenuity of early humans, and serves as an important record of their beliefs, values, and way of life.

The figurines, which illustrate both humans and animals, are made from a variety of materials but the largest proportion are quite small and made of barely fired clay. More Stylized Pictographs Pictographs are a form of writing that represents ideas and sounds with drawings or symbols. Perhaps most fascinating are the plaster skulls found around the area of the Levant, at six sites, including Jericho. Dating to approximately 3000 BCE and set on Salisbury Plain in England, it is a structure larger and more complex than anything built before it in Europe. Subjects of these statues include pregnant women, men, and live and dead animals. View of the excavated ruins at Tell Halaf, Syria: It was the first find of the Neolithic culture, subsequently dubbed the Halaf culture. 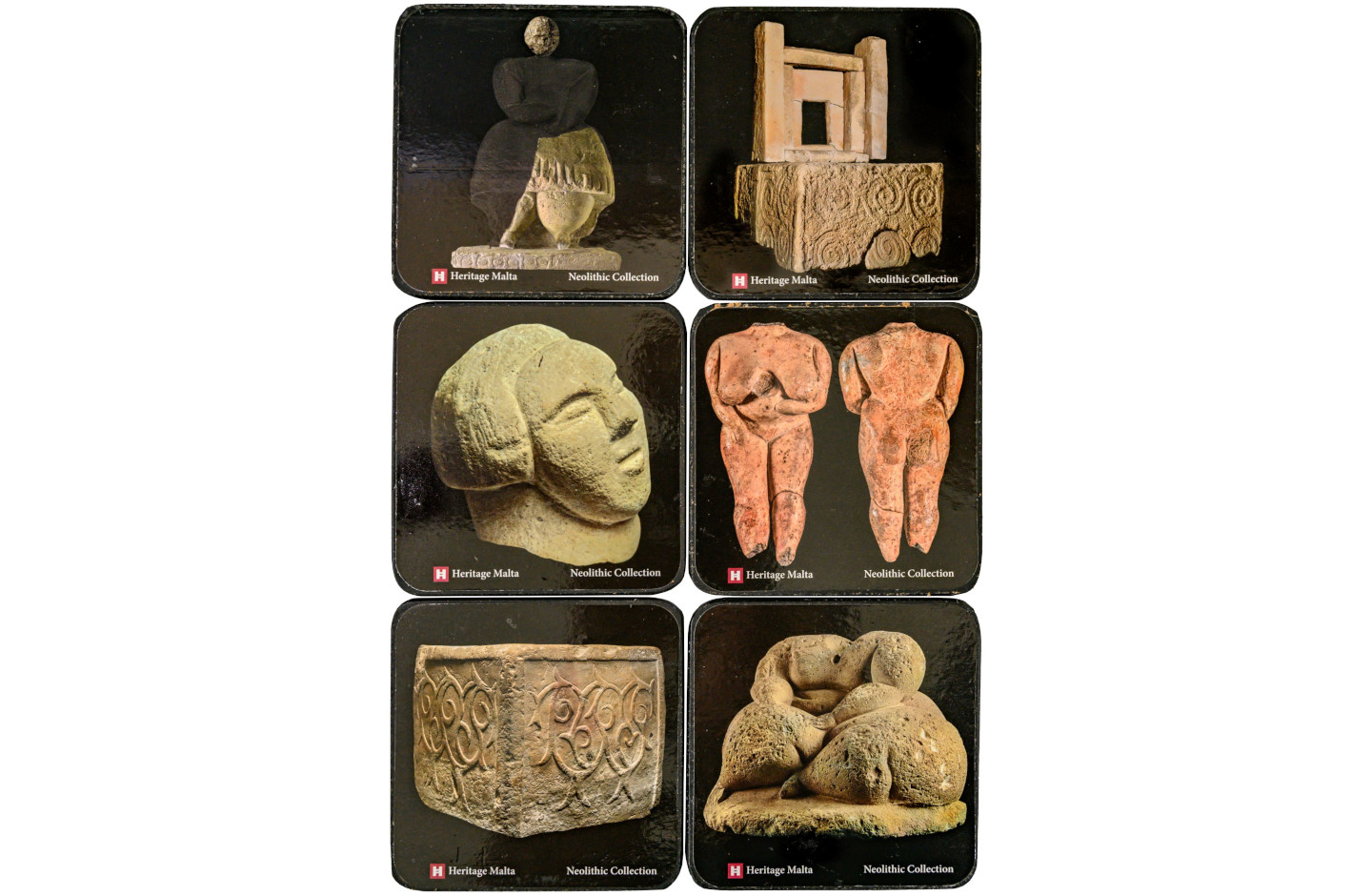 A clue might be in the types of creatures found and represented. New York: The Metropolitan Museum of Art, 2000—. Majiabang Culture 5000-3000 Located in the Taihu Lake area and north of Hangzhou Bay, it spread across southern Jiangsu and northern Zhejiang. Specifically, they were more realistic representations of human beings than those made during previous time periods of the Stone Age. Great effort was put into modeling the heads, with wide-open eyes and bitumen-outlined irises. Among the architectural finds are pillars decorated with reliefs of animals. 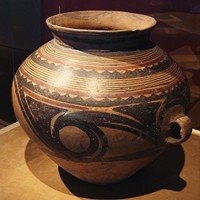 This washing of the rock face has had a devastating effect on the art, upsetting the physical, chemical, and biological balance of the images and their rock supports. A clue might be in the types of creatures found and represented. There are also many images of human figures, sometimes with accessories such as recognizable weaponry or clothing. The Hypogeum of Hal-Saflieni, located in Pola, Malta, is a subterranean structure excavated circa 2500 BCE, the only prehistoric underground temple in the world, showing a degree of stone artistry unique to the Maltese islands. Avebury One of the best known prehistoric sites in the United Kingdom, Avebury contains the largest stone circle in Europe.

Art and religion of Neolithic period 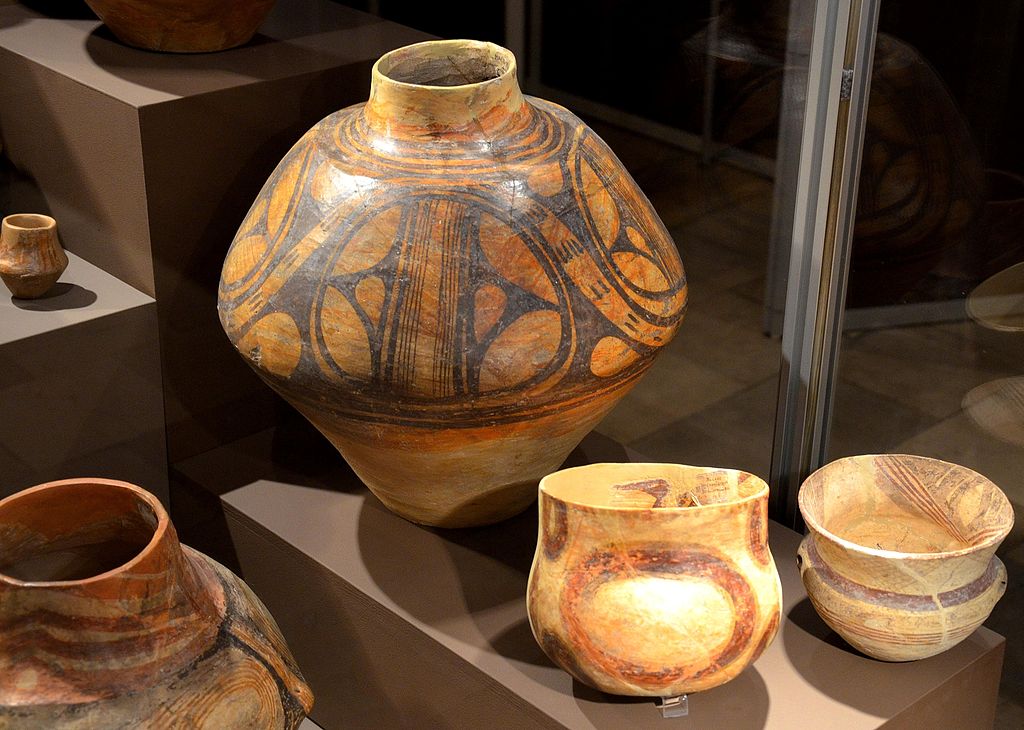 The creation and use of art during the neolithic era are related to the creation and use of tools. Knowth, Ireland Knowth is a Neolithic passage grave and monument located in the valley of the River Boyne in Ireland. It would appear that the ancient residents of Çatalhöyük were only interested in taking the pointy parts of the animals back to their homes! Photo: Art is everywhere among the remains of Çatalhöyük, geometric designs as well as representations of animals and people. View of Newgrange, Ireland: Newgrange is more than five hundred years older than the Great Pyramid of Giza in Egypt and predates Stonehenge by about a thousand years. The area is especially famous for its Round Head paintings which were first described and published by Henri Lhote in the 1950s. 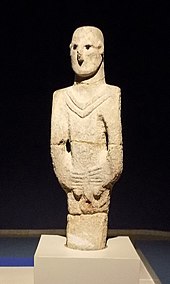 Lacking details beyond the face and intended to be viewed only from the front, these likely served funerary purposes. Subject matter More than 15,000 rock paintings and engravings, dating back as far as 12,000 years are located in this region and have made Tassili world famous for this reason. What was its purpose? Catal Hoyuk was a community that housed around seven thousand individuals. Stones to be fashioned into tools and ornaments were chosen for their harness and strength to withstand impact and for their appearance. Some of them also depicted animals, anthropomorphic animals, and similar creatures. It also started to take on more of a functional side than before. The wall paintings could have been brightly colored or more subtle in terms of the colors used.

What is neolithic art?

The purpose of art during the Neolithic era was to depict animals, gods, religious symbols, and figures for decorating purposes. Newgrange, Ireland Newgrange is part of the Neolithic Bru na Boinne complex, a collection of passage tomb mounds built around 3200 BCE and located in County Meath, Ireland. The use or meaning of Stonehenge is not clear, but the design, planning and execution could have only been carried out by a culture in which authority was unquestioned. Megaliths were commonly used in the construction of passage tombs and typically date to the Neolithic. Here is a culture that was able to rally hundreds of people to perform very hard work for extended periods of time. 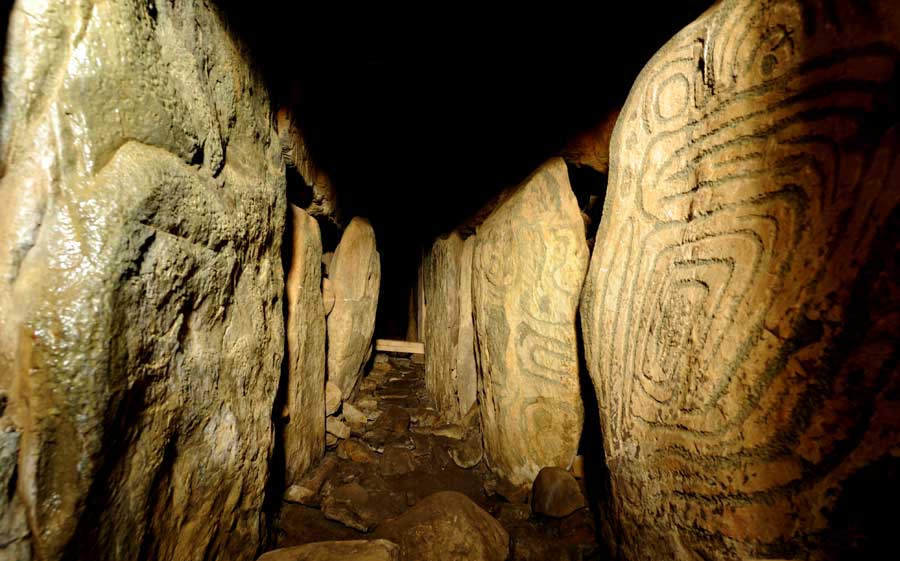 Photo: Nevit Dilmen, Nearly every house excavated at Çatalhöyük was found to contain decorations on its walls and platforms, most often in the main room of the house. Of course, pottery is not only an art form, but it also functions to carry food or liquids for long distances. Photo: Such Neolithic cave art drawings as these depict figures that are slightly more visually legible than Running Horned Woman. Within, a passage stretches through the structure ending at three small chambers. A new generation of researchers are tackling these questions. Liangzhu art is exemplified by its mysterious jade congs - cylindrical tubes encased in rectangular blocks - which were associated with Neolithic shamanism, and which anticipated the taotie design of Shang and Zhou Dynasty bronzes. Plastered human skulls The Pre-Pottery Neolithic A period is followed by the Pre-Pottery Neolithic B 7000-5200 BCE , which was different from its predecessor in important ways. 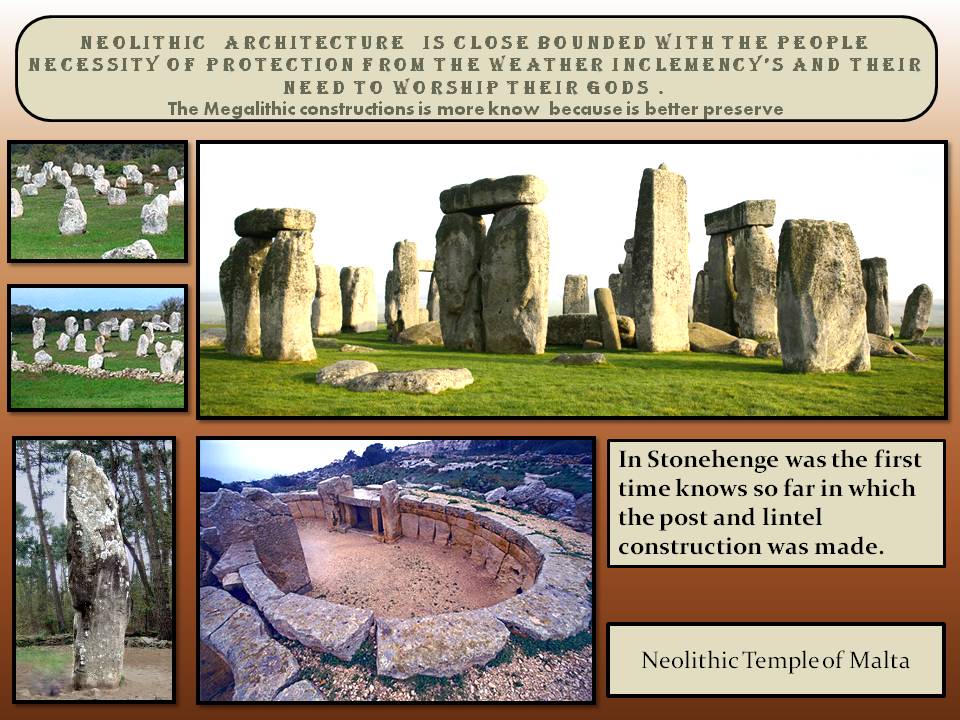 Notable neolithic murals include the Catal Hoyuk wall paintings in present-day Turkey. Elena FitzPatrick Sifford on casta paintings Apr. Xinglongwa culture is noted for its cylindrical pottery, as well as a limited amount of jade objects. He also studies sites in Africa, India, and the Far East. With this, they were able to communicate with each other without having a spoken language. Citation Department of Asian Art. Journey Through the Ice Age by Paul G. 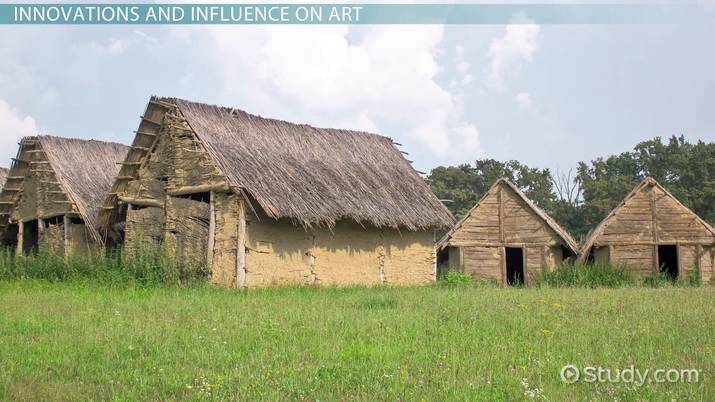 They are generally found in burials of privileged persons carefully arranged around the body. The major advances of the Neolithic 1 phase revolve around developments in farming practices, such as harvesting, seed selection, and the domestication of plants and animals. A common layout is the cruciform passage grave, characterized by a cross-shaped structure. Hemudu Culture 5000-4500 Based around Yuyao and Zhoushan, Zhejiang, as well as the islands of Zhoushan. Most of the sites are found in the south east of the country near its borders with Libya and Niger but there are also important concentrations in the Algerian Maghreb and in the Hoggar Mountains in the central south. Even so, we can tell a lot about the pottery just from the fragments alone. 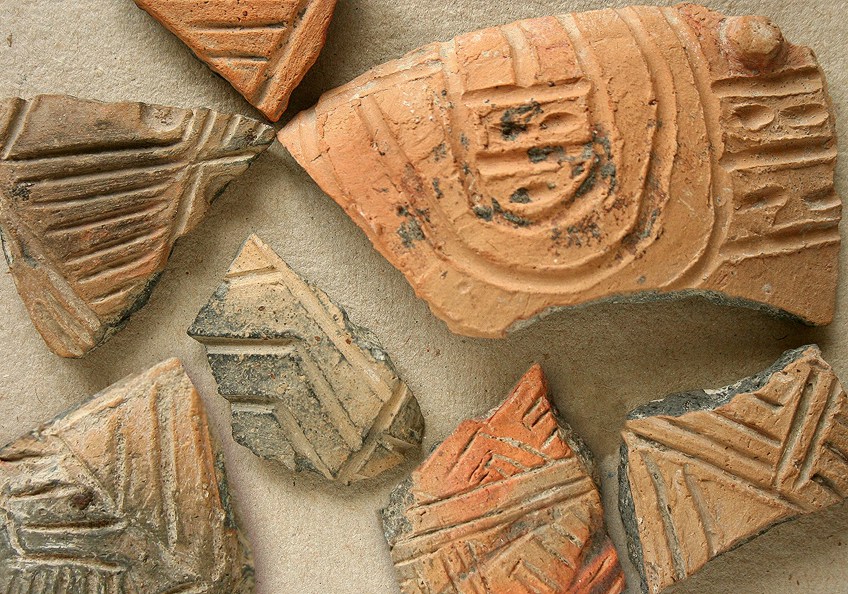 Megaliths were commonly used in the construction of passage tombs and typically date to the Neolithic. Thus, it is apparent that agriculture helped bring about the discovery of art during the neolithic era. The first group of artifacts is the painted pottery found at numerous sites along the Yellow River basin, extending from Gansu Province in northwestern China The second group of Neolithic artifacts consists of pottery and jade carvings Of all aspects of the Neolithic cultures in eastern China, the use of jade made the most lasting contribution to Chinese civilization. Repeated lozenges and zigzags dance across smooth plaster walls, people are sculpted in clay, pairs of leopards are formed in relief facing one another at the sides of rooms, hunting parties are painted baiting a wild bull. London: British Museum Press, 1992.