"Little Red Riding Hood" is a classic fairy tale that has been told and retold countless times over the centuries. At its core, the story revolves around the themes of temptation, innocence, and the consequences of disobedience.

At the start of the story, Little Red Riding Hood is a young, innocent girl who is tasked with delivering a basket of food to her sick grandmother. Along the way, she is tempted by the sly and cunning wolf, who attempts to lure her away from her path and towards danger. Despite the warnings of her mother, Little Red Riding Hood succumbs to the wolf's charms and strays from the path, ultimately leading to the demise of her grandmother and her own near-death experience.

One of the main themes of "Little Red Riding Hood" is the danger of temptation. The wolf is a symbol of temptation and represents the allure of the unknown and the forbidden. Little Red Riding Hood is warned by her mother not to stray from the path, but she is unable to resist the temptation of the wolf and ultimately pays the price. This theme serves as a cautionary tale, warning readers of the dangers of giving in to temptation and the importance of following the rules and listening to those who are wiser and more experienced.

Another important theme in "Little Red Riding Hood" is the loss of innocence. Little Red Riding Hood is depicted as a pure and innocent young girl at the start of the story, but through her interactions with the wolf and her own disobedience, she loses her innocence and becomes more aware of the dangers and complexities of the world. This theme is often interpreted as a metaphor for the journey from childhood to adulthood, as young people must learn to navigate the challenges and dangers of the world and make their own decisions.

Finally, "Little Red Riding Hood" also explores the consequences of disobedience. Little Red Riding Hood's disobedience leads to the death of her grandmother and her own near-death experience. This serves as a warning to readers of the importance of following the rules and listening to those who are wiser and more experienced. It also highlights the idea that actions have consequences, and that it is important to think carefully about the choices we make and the impact they can have on others.

In conclusion, "Little Red Riding Hood" is a timeless fairy tale that explores themes of temptation, innocence, and the consequences of disobedience. Through its engaging and enduring story, it serves as a cautionary tale and a reminder of the importance of following the rules, resisting temptation, and considering the impact of our actions on others. The author claims that the specified fairytale incorporates a range of adult themes and serves as a cautionary tale that allows children learn about the threats associated with sexual relationships. Dworkin is an example of using the modern interpretation of the fable to advance feminist ideology. In this more enlightened era, it stands to reason that Perrault wrote as epilogue to the Little Red folk tale an admonition for young ladies to protect their virtue from wolves of the human variety: Moral: Children, especially attractive, well bred young ladies, should never talk to strangers, for if they should do so, they may well provide dinner for a wolf. Little Red Riding Hood Analysis. Theme is the message the play wants to convey. 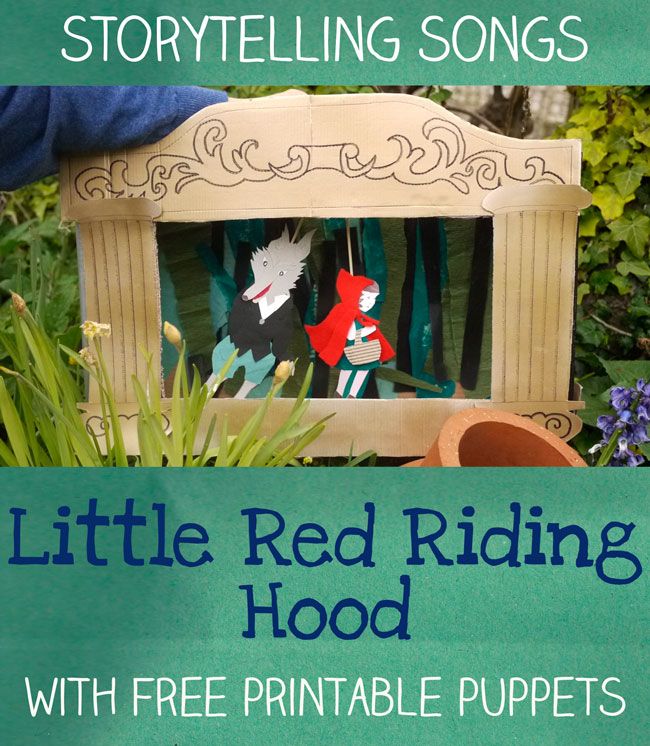 It's also possible that the earliest version might have connections to similar East Asian tales. Roblox scripting is not as hard to learn as other programming languages might be. That was a German twist to the story. Looking at the theme on dangers of naivety, the pigs were not as naïve as the little girl. Zipes 1983 claims that more of the extant versions at the time were ghastly and certainly not meant for reading to children since they involved the wolf slaughtering the grandmother and feeding a broth of blood and flesh to Little Red Riding Hood. The source can be used in the Research Argument essay as the Stronger Reason since it provides a profound exploration of the problem. This idea is reinforced by thinking of the color red as representing menstruation and availability for sex.

Theme Of Naivety In The Little Red Riding Hood 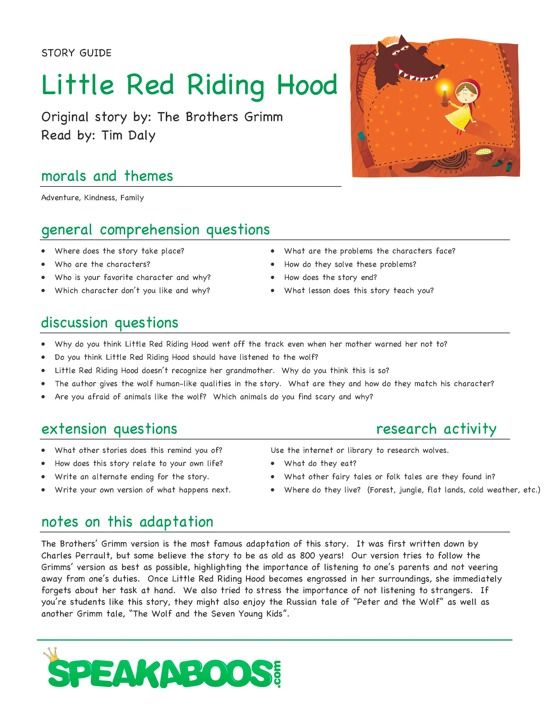 In her world everyone is nice to her, no one wanted to harm her. In fact, the third pig is more experienced and informed on how to deal with wolfs. In the Grimm story, the huntsman does the dirty work so the child does not feel the guilt of having the beast's blood on her hands. The first two pigs cannot be said to be naïve instead they are foolish as the wolf is referring them. Essentially, she is sent on a specific journey, told not to leave the path, and yet because she does she finds herself in a dangerous situation. Moveable Type, Issue 2.

What is the dialogue of Little Red Riding Hood? 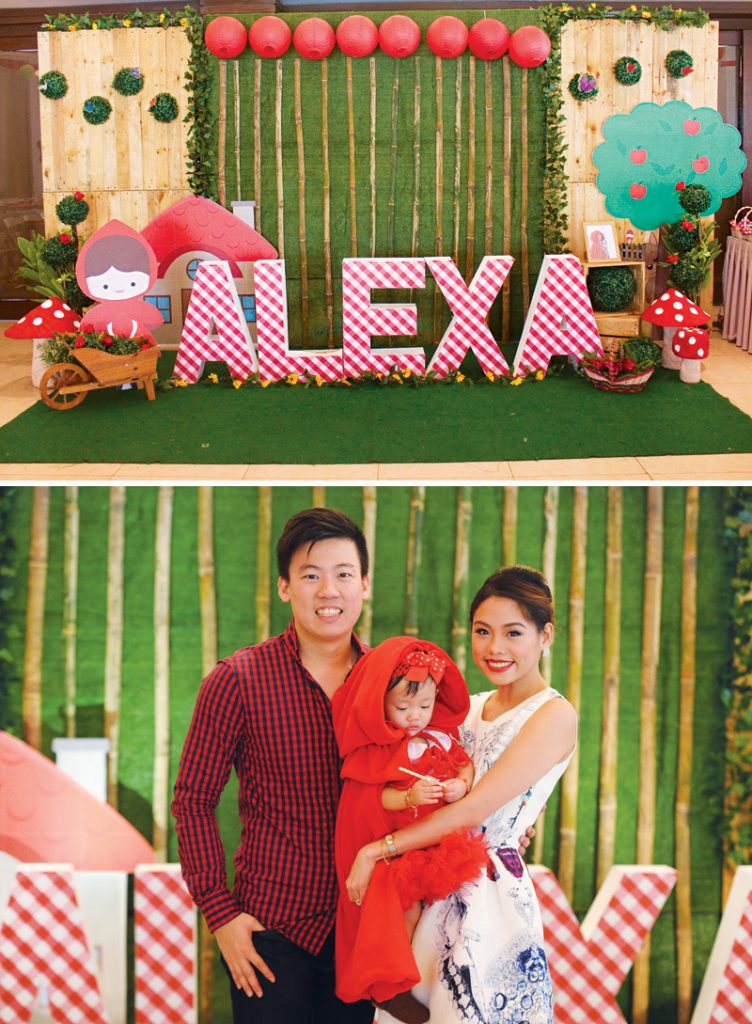 All the better to run with, my child. But you will need to commit time and effort. The term theme can be defined as the underlying meaning of a story. Then a hunter decides to help her and teaches Premium Rape. They also change away the topic making it focus more on the obedience children must have towards their parents rather than to Perrault's sexual warnings. Young Peter raises farm animals with his grandfather in a forest glade. 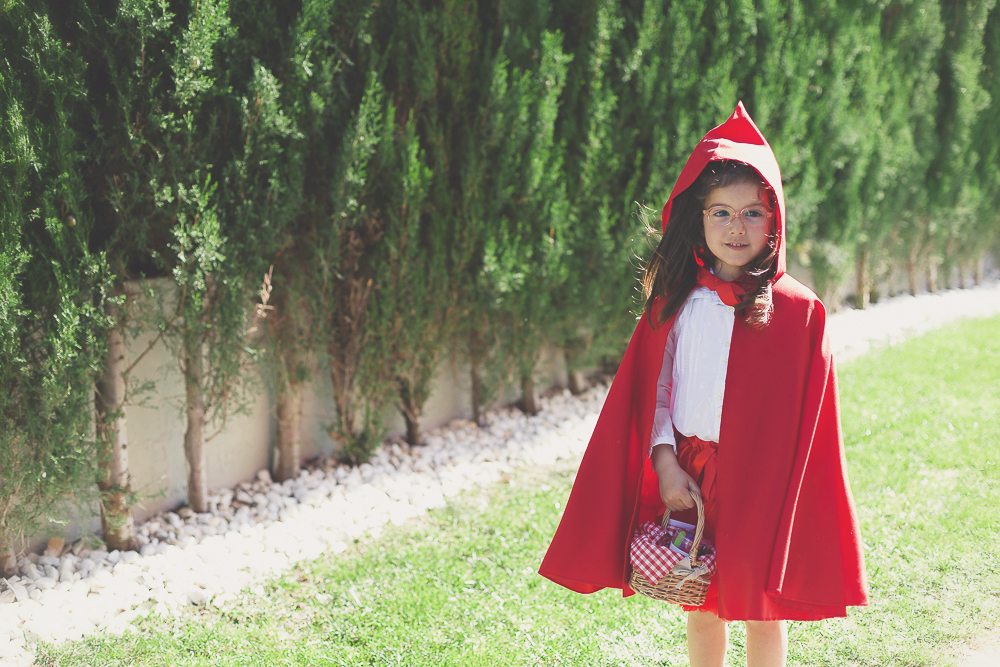 The story begins with a little girl getting instructions from her mother to take some bread and butter to her ailing grandmother. It seems too dark to just be a lesson about listening to your parents. Still, it must be conceded that, in giving new voice to other characters in the fable, the Carter rewriting had weakened the patriarchal paradigm somewhat and opened up new possibilities for gender and erotic identity. Learn more Background The story of Little Red Riding Hood exists in numerous iterations, yet it is mostly known owing to its interpretation by Charles Perrault and the Grimm brothers Silva 171. The second pig with the slightly better house is not spared by the still hungry wolf. 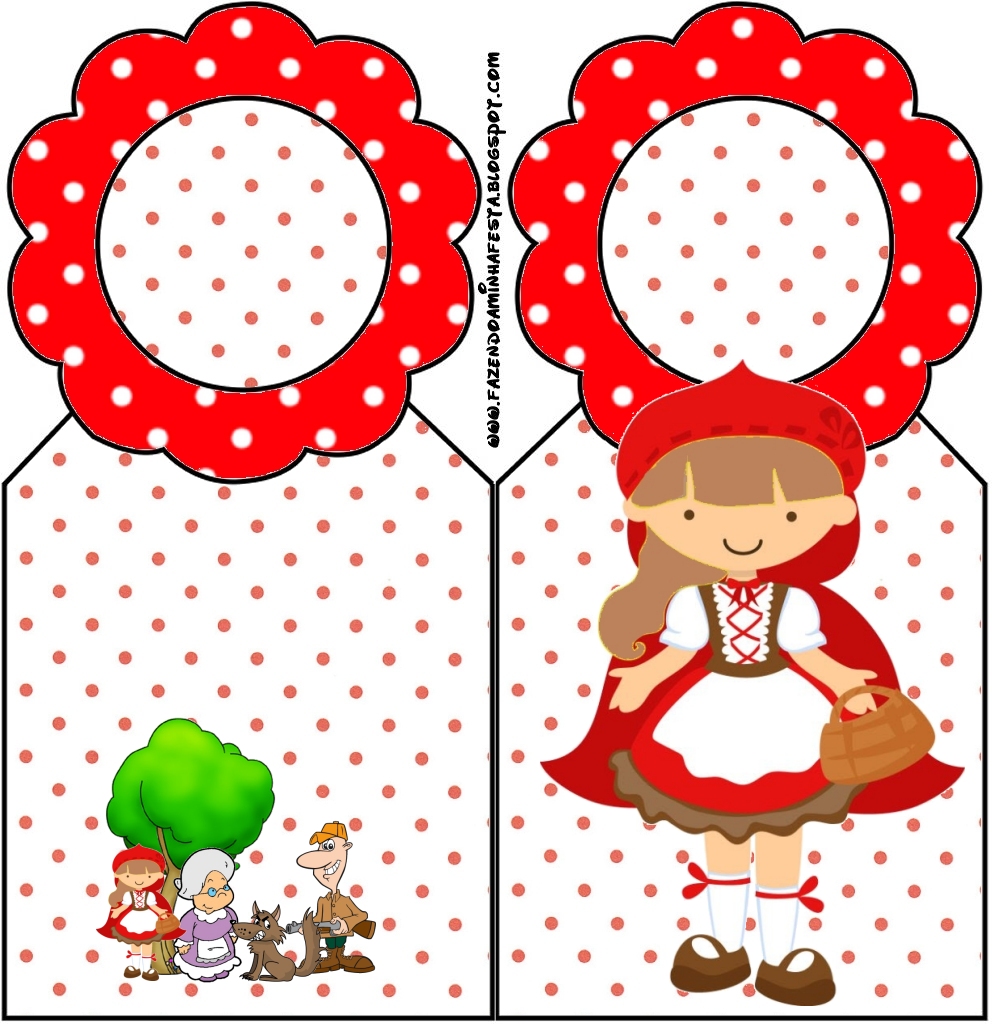 All the better to hear with, my child. Furthermore, the narrative includes the description of the scenes of flower-picking, which can be defined as inherently feminine actions Silva 178. He waits it out on the roof, hoping to waylay Little Red Cap on her way home. Your title page should contain a shortened version of your title and page number 1 in the upper right corner. The girl walks through the woods to deliver food to her sickly grandmother wine and cake depending on the translation. It also emphasizes her innocence and how naive she is, because she is not capable of realizing what is about to happen. Many are just for entertainment, but many of them are for teaching a lesson. Witherspoon is frequently seen wearing a red leather jacket to modernize the red cape of old. In the time Perrault wrote the tale, the women of France would not consider wearing a red cloak, the red was considered to be the colour of sin, only women with really bad reputations or birthed from a shameful family would wear red. The wolf emerges the victor of the encounter and there is no happy ending. Thus, the poetess demonstrates just how far the reversal of gender stereotypes can be taken. Male Sexual Desire is another theme visible in the story. Serving as a cautionary tale about the perils of inappropriate sexual behavior, Little Red Riding Hood is also highly relevant for contemporary culture. 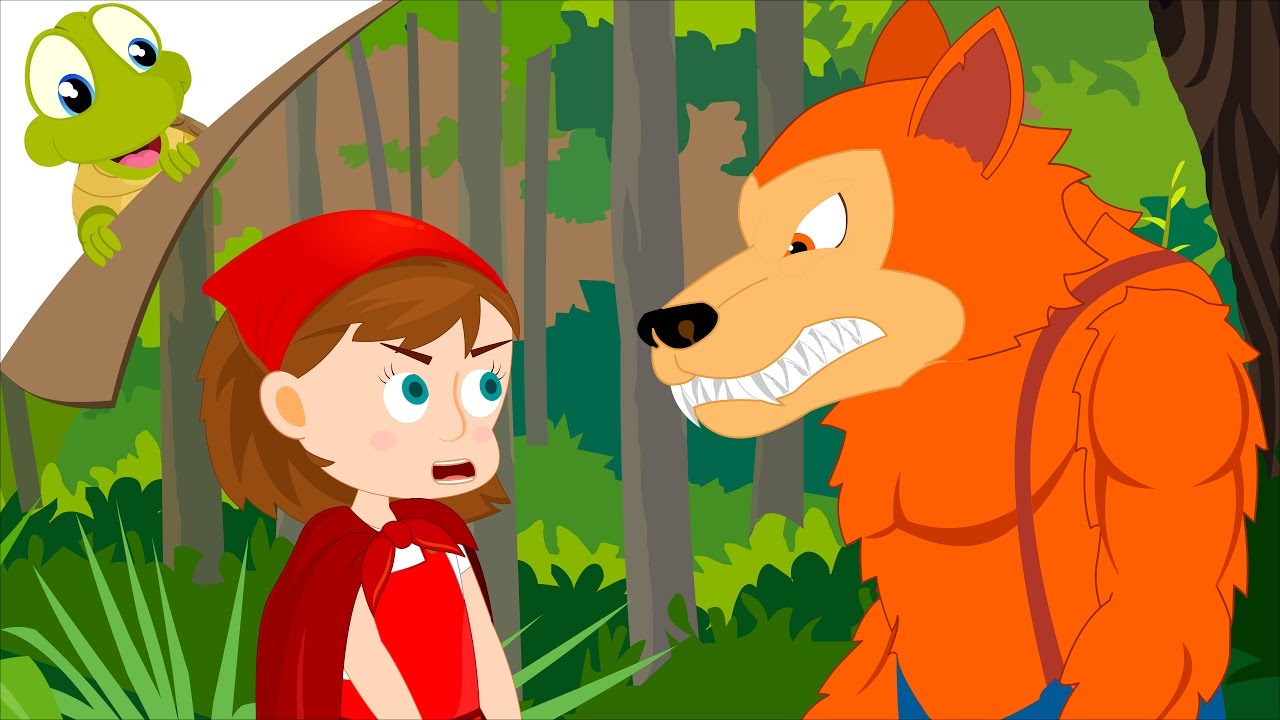 One critical analysis forms a version of the tale that revolves around the fear of the cannibalistic or overpowering mother and the latent expression of nubile sexuality: when discussing LRRH it is also necessary to chart its journey from oral tale clearly connected with cannibalism, abjection and sexuality, to Perrault's French version whose Royal audience necessitated serious alteration of content, to the Grimm version which extends the Perrault alterations and significantly changes the moral point of the tale by changing the ending twice. Sex Roles, 35 7-8 461-488. Both are, in fact, morality tales of redemption through piety. This idea is based upon similar circumstances as the Resurrection theme in the sense that when something is taken from the stomach they are reborn again, although the wolf has gone through the transformation. By these events it can be shown that when they are taken from the stomach they are essentially born again. He also deceives her by dressing up as her grandmother.

The Theme of Red Riding Hood 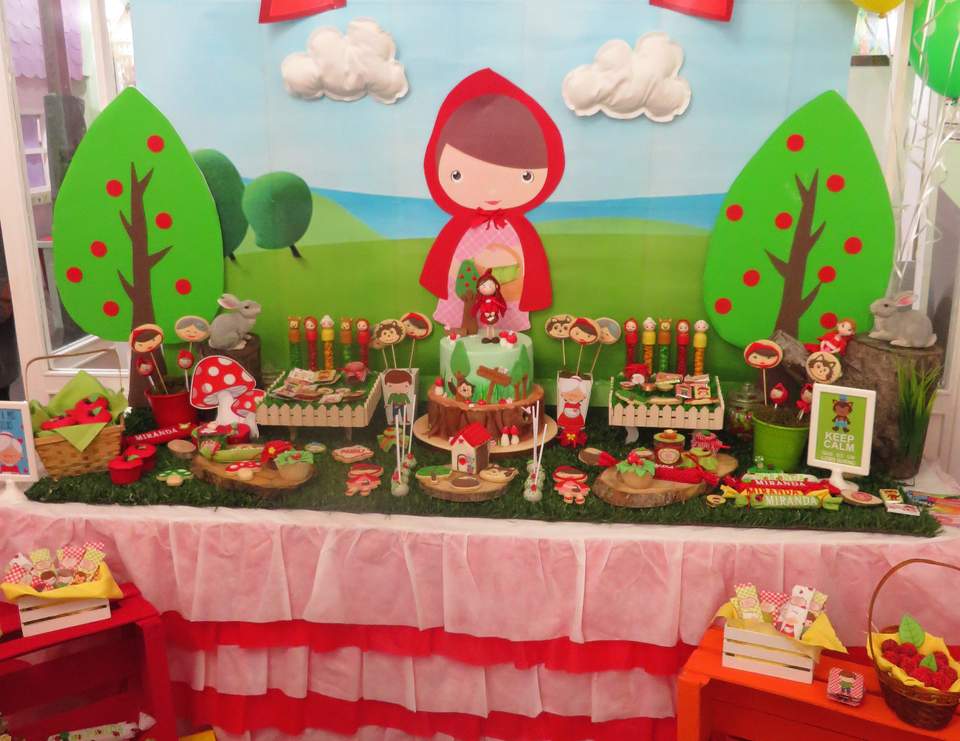 Then she questions what she sees, noticing her grandmother's over-sized ears, eyes, hands, and mouth. The red cape which she wears is a symbol of her sexuality. Some versions have been 'toned-down' a bit on the gruesome scale, having the grandma hide in the closet and later get rescued. With a wicked stepmother Eleanor Audley and two jealous stepsisters Rhoda Williams, Lucille Bliss who keep her enslaved and in rags, Cinderella Ilene Woods stands no chance of attending the royal ball. These characters are in contrast to form the villain and innocent personalities that drive the plot Tartar, 51.