Haiku is a traditional form of Japanese poetry that consists of three lines. The first and third lines contain five syllables, while the second line contains seven syllables. Haiku is often characterized by its use of imagery and the evocative nature of the language used.

One of the key features of haiku is its brevity. The poems are typically only a few lines long, making them easy to read and understand. Despite their short length, haiku often convey a sense of depth and emotion. The imagery used in haiku is often vivid and descriptive, and the language used is carefully chosen to create a specific mood or atmosphere.

Haiku often focus on nature and the changing seasons. Many haiku describe the beauty of the natural world and the feelings that it evokes in the observer. In traditional haiku, the season is often referred to using a specific word or phrase known as a "kigo." This serves to anchor the poem in a particular time and place, and adds an additional layer of meaning to the poem.

Another important element of haiku is the use of "cutting words," or "kireji." These words, which are typically placed at the end of one of the lines, serve to break up the poem and create a sense of contrast or tension. The use of cutting words is a distinctive feature of haiku and helps to give the poems their distinctive structure and rhythm.

Haiku is a beautiful and evocative form of poetry that has a long history in Japanese culture. Its structure, with its carefully chosen syllables and use of imagery and cutting words, allows poets to create poems that are both brief and powerful. Whether you are a seasoned poet or just starting out, exploring the world of haiku can be a rewarding and enriching experience. 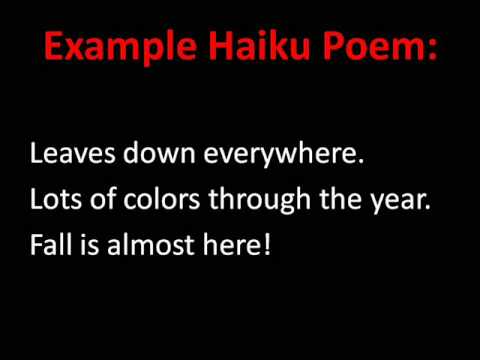 A haiku is a beautiful form of poetry, so take time to appreciate it before you begin writing it. Just as we capture a special moment in our lives, haiku poetry captures a moment in time, creating and sharing the joy, the wonder, and the perhaps profound emotional experience that exists within that moment. Consider all of the ways language can be used to create a vivid image with a particular focus on brevity; regardless of the actual structure of a haiku, it must be a very brief poem. In addition to these four types of syllables, Japanese poets also include some special characters called kana when writing poems in the classical form. Haikus have existed for a long time and remain popular today, indicating how powerful such short works of poetry can really be.

The first line often contains five syllables, the second line seven syllables, and the third line five syllables. But as with the sonnet modern usage has stripped away a lot of these. Previous to the invention of the form, Japanese poets wrote waka, a form of poetry that followed a 5-7-5-7-7 syllabic format. Kireji are a particular class of words for which there is no entirely accurate English translation. Contributing to this new feeling is the removal of the phrase and fragment.

Haiku Poems: How to Write a Haiku 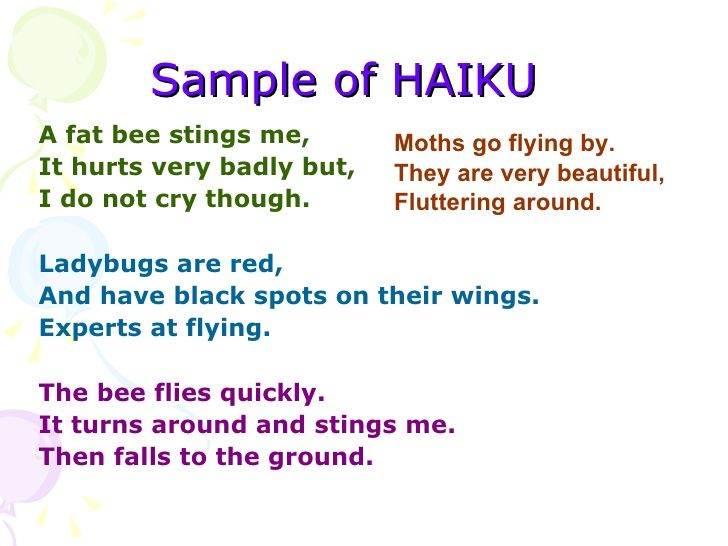 . This can be seen in the haiku by Graham Nunn, featured earlier: distant thunder 4 each stroke of the oar 5 stirs the clouds 3 Line one establishes a broad view before we shift closer with line two, to the moving oar, before the poem finishes with a micro view of the oar tip, as it stirs clouds which have been reflected in the water. Jack Kerouac 1922-1969 The windmills of Oklahoma look In every direction Kerouac, as well as the Beat Generation in general, re-popularized haiku poems for the West. Perhaps it was the moment our child took his or her first steps, or said his or her first word. Make haiku your record of lived experience, your diary in effect. Richard Wright 1908-1960 I am nobody: A red sinking autumn sun Took my name away. A world of dew, And within every dewdrop A world of struggle.

What Is a Haiku? 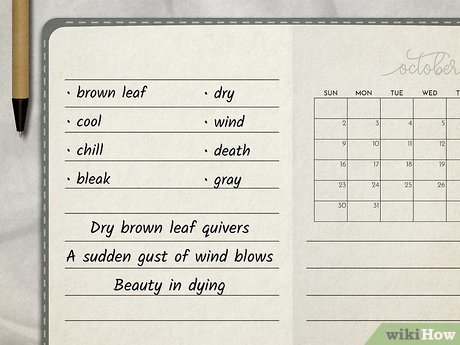 Lesson Summary A haiku is a Japanese poetry style that is traditionally written with three lines and 17 syllables that follow a 5-7-5 pattern. A time or year, time of day or setting e. A Japanese haiku counts on, whereas an English poem counts syllables. This distinction is mostly irrelevant to English speakers, as we use a different set of vowel sounds than Japanese speakers use. In the following video a professor of modern foreign languages explores different forms of Japanese poetry, including renga and haiku. For this reason, a 17-syllable English poem can be much longer than a traditional 17- on Japanese poem, straying from the concept that Haiku are meant to distill an image using few sounds.

How to Write a Haiku (With Haiku Examples) 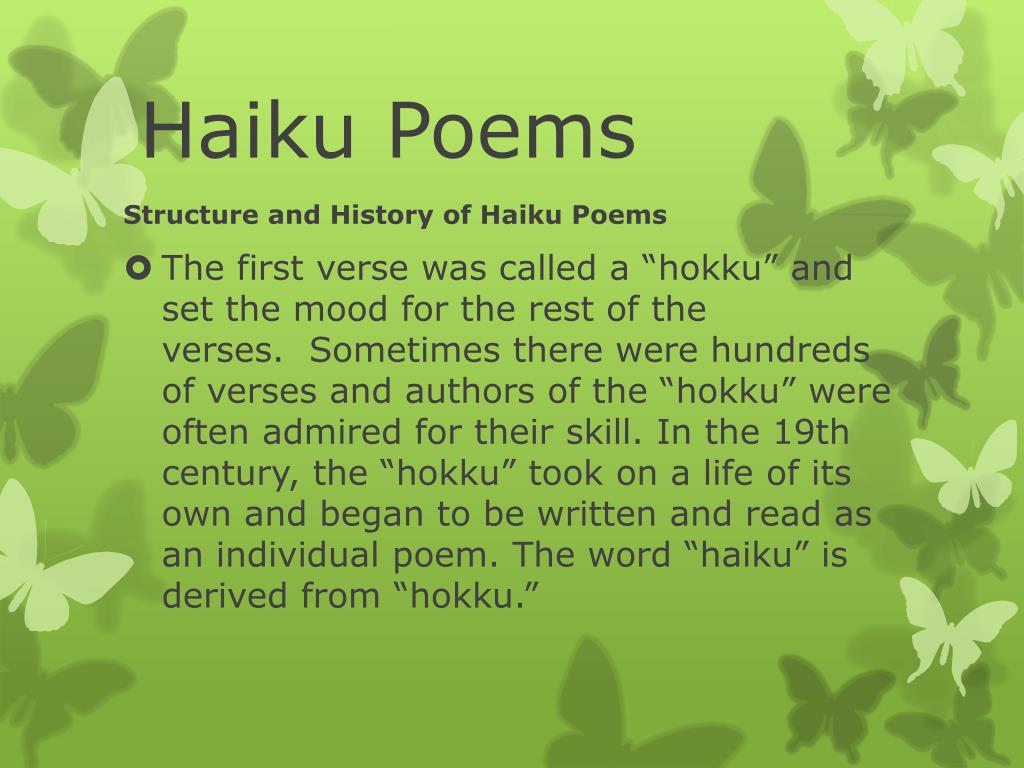 Although using 5-7- 5 is no longer considered to be the rule for Haiku in English, it is still often taught that way to children in school. As the writer, you can decide whether you want to follow all of the rules of haiku, some of them, or none of them. Senryū poems dwell on the follies of human nature. Traditionally, haiku is written in three lines, with five syllables in the first line, seven syllables in the second line, and five syllables in the third line. Giant, foul-smelling shadow Smashing through the forest. John Brandi and Dennis Maloney.

How To Write A Haiku: Tips And Examples

Throughout your day, use a little notebook to transcribe your dreams, observations, and thoughts as they arise. A Brief History of Haiku Poetry Japanese haiku poetry evolved from several poetic traditions. Line 3: What do you notice where you are now? Something that obsessively confuses you. A haiku poet might use it to engage the reader by introducing something unexpected in the poem or to connect two seemingly unrelated events or images. PowerPoint presentations are useful tools for teaching concepts and information. But viewing the haiku as a way to package up and convey your best observations is no bad way to think of it.

Process of Writing a Beautiful Haiku Reading through examples of haiku can help you understand and appreciate haiku before you write one yourself. In 1921 the magazine La Ronda published a negative critique of the Japanese "Hai-kai" fashion that was spreading in France and Spain, while in the following years many futurists appreciated the fast haiku style. Second Line 7 Syllables - The second line continues where the first one left off. They are known as "the Great Four" and their work is still the model for traditional haiku writing today. Related Post t is said that 5-7-5 or 5-7-5-7-7 syllables are the most suitable rhythms for Japanese. Modern English Tanka Press. Sometimes it might be better to choose a word or short phrase to hint at the season, or to just name it outright. 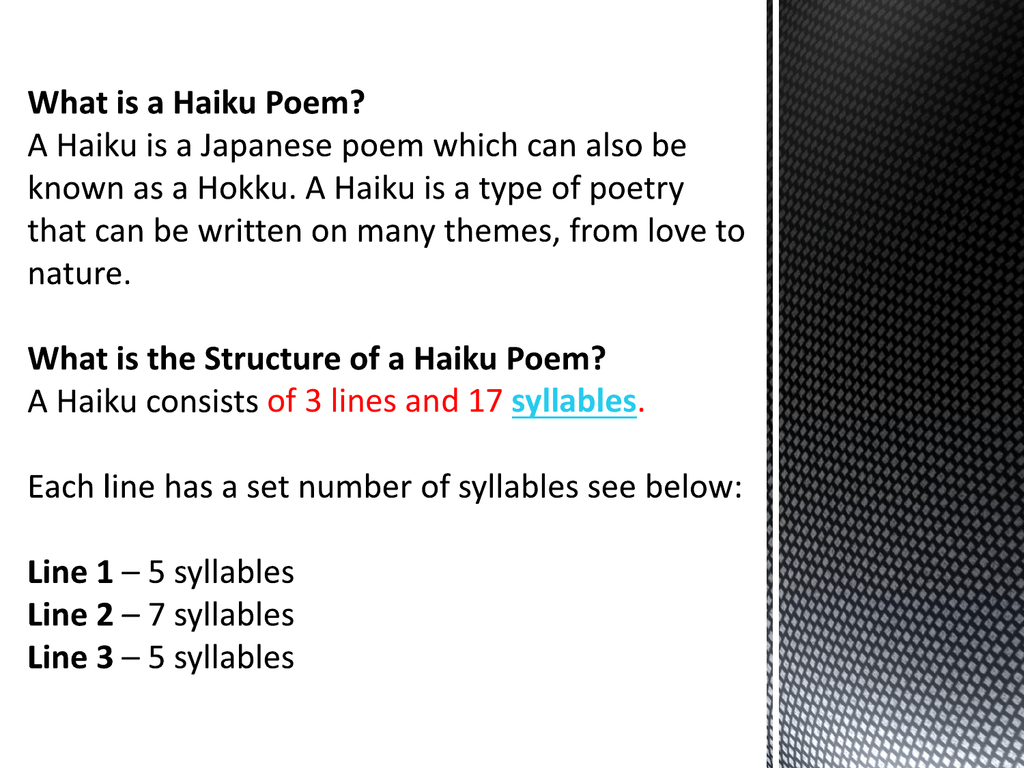 Shiki also criticized Bashō. This breathtaking poem begins with an absence of self, juxtaposed against the sublime immensity of the sun, which has stripped the speaker of identity and left him in a field of mystery. Even if they are Japanese! Yes, it does—the instant when the poet realizes that from the point of view of the fish, bass are eating their meals from the moon, not the water and again, see how much longer it takes me to explain that in prose! The specificity of many of the elements of haikus has made it challenging to accurately translate haikus into English and to incorporate the form into English-language poetry. Additionally, instead of the Japanese kireji, English-language writers will often create juxtaposition by describing one image in the first two lines of the poem and a second image in the third line. You might find your work growing and evolving, hopefully for the better. Sometimes, a traditional haiku definition undergoes more drastic changes, particularly in the modern day, but some elements of the poetic form remain the same.