Greenberg modernist painting refers to the work of American art critic Clement Greenberg, who is widely known for his contributions to the development of modernist painting in the 20th century. Greenberg was a prominent figure in the New York art scene and was closely associated with the Abstract Expressionist movement. He is perhaps most famous for his writing on the topic of modernism, which he saw as an ongoing tradition in the visual arts that was characterized by the use of abstract form and the rejection of traditional representational techniques.

Greenberg's views on modernist painting were highly influential during his lifetime, and continue to shape the way that many people think about the role of art in contemporary society. He believed that modernist painting should be focused on the formal qualities of the artwork itself, rather than on its content or subject matter. According to Greenberg, the primary goal of modernist painting was to create a sense of visual order and unity, using line, color, and composition to create a cohesive whole.

One of the key features of Greenberg's modernist painting was its emphasis on abstract form. He believed that abstraction was a crucial aspect of modernist art, as it allowed artists to explore the fundamental qualities of their medium and to create works that were expressive and emotive, even in the absence of representational elements. Greenberg argued that abstract form was essential to the development of modernist painting, as it allowed artists to express themselves more fully and to create works that were more open to interpretation.

In addition to his writing on modernist painting, Greenberg was also known for his close relationships with many of the leading artists of the time. He was a friend and mentor to figures such as Jackson Pollock, Mark Rothko, and Barnett Newman, and he played a crucial role in promoting their work and helping to establish their careers. Greenberg's writing and advocacy helped to establish Abstract Expressionism as a major movement in the art world, and his influence is still felt today.

In conclusion, Greenberg modernist painting refers to the work of Clement Greenberg, an influential art critic who played a key role in the development of modernist painting in the 20th century. His writing on the subject of modernism helped to shape the way that many people think about the role of art in contemporary society, and his close relationships with leading artists of the time helped to establish Abstract Expressionism as a major movement. Today, Greenberg's views on modernist painting continue to be widely studied and debated, and his contributions to the art world are widely recognized.

Another case of abstraction is the painter Rothko who bases his style on Color Field painting characterized by strong colors, shapes and balances between the elements. In essence, Cubism is a modernist art movement that challenges the traditional norms of fine art by directing its focus to the silhouette rather than to the esthetics in… Thesis Statement About Surrealism Baotien T. Rosenberg also supported various Abstract Expressionist artists who had brought figurative or narrative elements back into their free, expressive paintings such as Willem de Kooning and Philip Guston. Judging from the critiqued text, I do not think that Greenberg divided works of art into the categories of acceptable and non-acceptable. Through verse he commends and praises the painter's conflict to locate his actual imaginative structure and slant towards a particular method for being creative in the poem "The Painter". Even though the first exhibition of the impressionism movement was not as successful as they hoped, it was the starting point for a new way of thinking about and creating Ron Paul's Analysis 779 Words 4 Pages As I had the rare ability to draw photo-realistically, art classes were easy and enjoyable throughout the majority of my educational journey.

Rafael demonstrates his mastery of skills in not only through painting but also the important figures and thinking of that age through visual and aesthetic choices. Greenberg was then able to identify that what characterizes the uniqueness of each form of art is the nature of its medium: What he characterized as wholly unique to painting is the flatness of its two dimensional medium, and the purely optical rather than the tactile too. . This particular painting reveals how movements using a dripping technique and inherent gravity can create unseen visual forms on a horizontal canvas. To resolve such difficulties, I scrutinized many works of great contemporary artists and after an extensive period of time, I finally came to an understanding that the essence of the style is that the inference drawn by the beholder effectively becomes the truth. 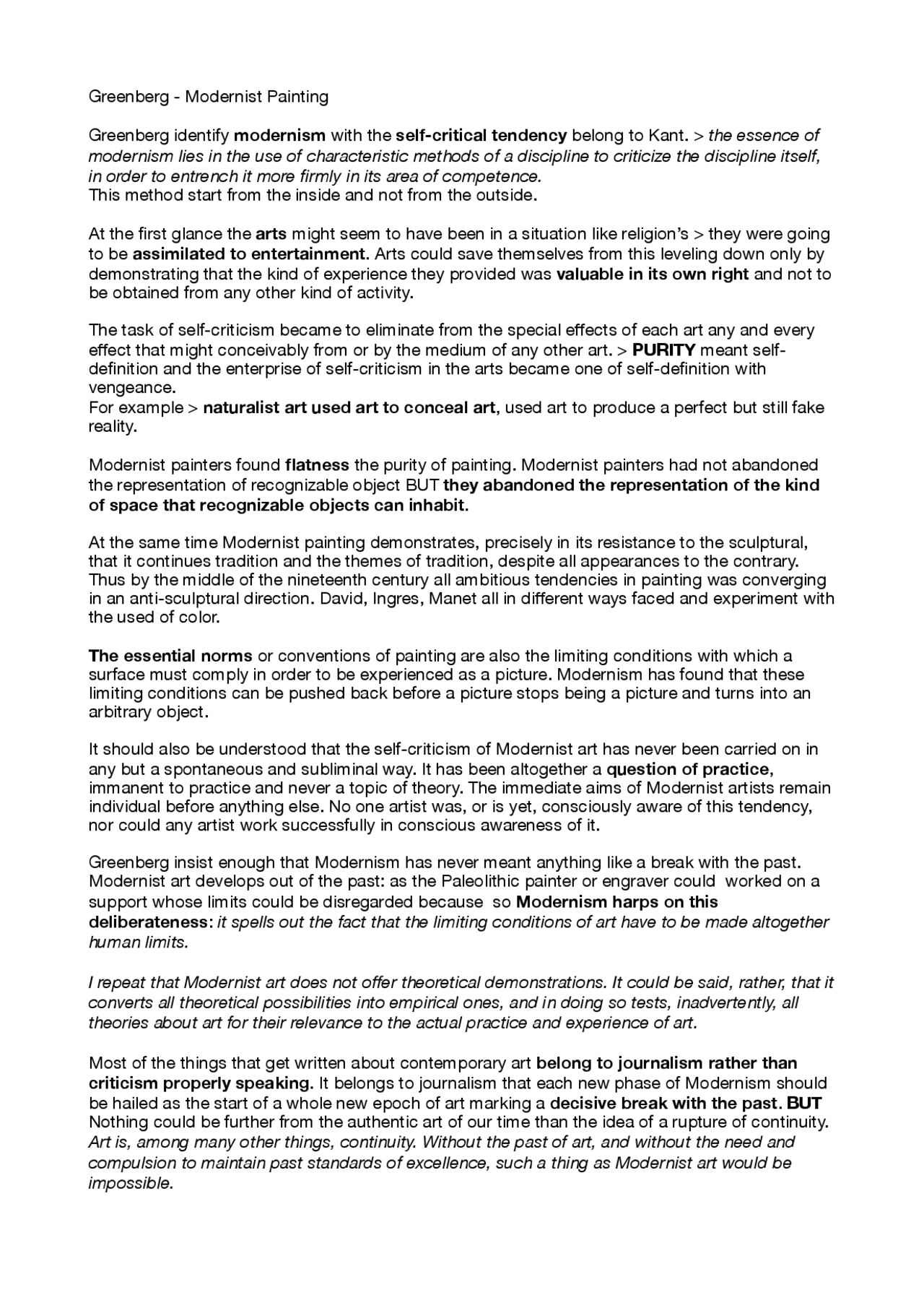 If the theory has a weakness, it lies with the centrality of pictorial art, which it seems to fit modernism like a glove. They can both be accused of ignoring the traditional form of art and went for reality, which sometimes had a blurred context and is the reason why the Salons denied both artists. Narrative Structure Of Pulp Fiction 1374 Words 6 Pages Modernism began in early 1700s with the rise of capitalism. Two artists, Wayne Thiebaud and James Rosenquist, exemplified this idea of modernism in painting that Greenberg would support, but accomplished this feat through two drastically different methods of painting which used very different imagery. They defined who the great artists are and through their judgments they have even decided the value of art. Nowadays its true meaning is to uncover our culture. Symbolism gives great emphasis on the use of emotion, feelings and subjective thought rather than that of realistic thought.

Surrealism: genesis of a revolution. Kitsch is vicarious experience and faked sensations. Greenberg writes, Kitsch, using for raw material the debased and academicized simulacra of genuine culture, welcomes and cultivates this insensibility. Because he appeared to have considered and taken into account the limitations of painting as the application of paint upon a flat surface, or a stretched canvas, Édouard Manet is designated by Greenberg as the first Modernist artist. Their writing has been so influential in the history of art that we have forgotten that they are opinion writers and not of fact; we have many times taken their opinions too literal, taken specifics for granted, when in reality we should be questioning their reflections. 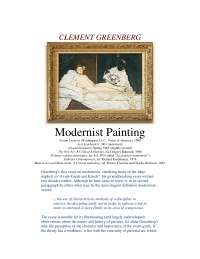 The text is very dense in terms of being saturated with ideas and concepts. In addition, it seems to me that whenever something is applied on a plane, it corresponds to the creation of elements inside a frame for the viewer to look into. Clement Greenberg: The Collected Essays and Criticism. Greenberg claims that the Old Masters created space one could Impressionism as a Avant-garde Movement aesthetic and ideological underpinnings of the Modernist artwork, Impression, Sunrise of Claude Monet. Viewers search for their own meaning in the painting since the simplicity of most modern works leaves much room for imagination.

Retrieved 8 April 2018. While Kant would at least judge these two artists and perhaps find them wanting , Greenberg seems to imply a connection between Modernism and the avant-garde and establish ground for exclusion of the unworthy. Greenberg curated an exhibition titled Post-Painterly Abstraction in 1964 at the Los Angeles County Museum of Art which included works by thirty-one different artists; it was so successful that Post Painterly Abstraction is now recognized as a movement in its own right. Between the 14th-16th centuries, Renaissance painters focused on greater realism due to the re-emergence of art and science, leading to a heightened perspective in painting. In the years after World War II, Greenberg pushed the position that the best avant-garde artists were emerging in America rather than Europe. Francis Frascina and Charles Harrison, 1982.

Summary: The Application and Discourse Of Clement Greenberg’s “Modernist Painting”

Indeed, he stresses on how Modernist painting separates three-dimensional illusion from its two-dimensional surface, reserving it for sculpture that is an art of three-dimensionality. Greenberg gives examples from the history of art to illustrate his thought. The Collected Essays and Criticism, Volume 3: Affirmations and Refusals, 1950—1956. William Blake, Ancient of Days, frontispiece of Europe: A Prophecy, 1794, is a prime example of how an artist incorporates classical reference alongside the inner obscure visions that so categorizes the artistic movement of Romanticism. It defines its position as neither modernist painting nor modernist sculpture, but rather art which is whole, without parts. 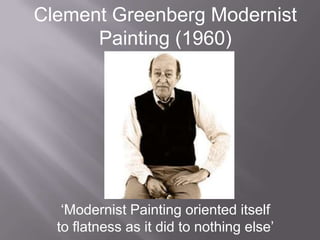 The Modernist Movement Analysis 986 Words 4 Pages The start of modernism being the Pioneer Phase took place between the middle of the First World War and the crucial movements from 1929 to 1933, early 1930s being know as the International Style. In Modernist painting, the spectator is made aware of the flatness and sees the picture first, before noting the content. His work was heavily critiqued and promoted by renowned Modern art critic Clement Greenberg, along with other mid-century The Differences Of Modernism: Clement Greenberg And Ronald Rosenberg am going to focus more on abstract expressionism. Therefore, paintings that could be regarded by Greenberg as non-acceptable are those that failed to recognize flatness as a critical element of Modernist painting, e. On the writings of these two gentlemen about art I will try to draw out the differences in the idea of what abstract expressionism is and what it is supposed to be, compare and outline the similarities and the differences Manet And The Object Of Painting By Michel Foucault Edouard Manet, an artist most commonly known in relation to the advent of modernist art, is credited with introducing such painterly techniques as producing flatness in painting, and, a layering down of hues alla prima. Works Cited Clark, Timothy. The artwork and Impressionism is considered to be a visual articulation of the avant-garde and the latter statement is explained.