The Golgi apparatus is made up of stacks of flattened, membrane-bound cisternae, or flattened sacs, which are organized in a linear fashion. It is located near the endoplasmic reticulum (ER) and is connected to it via vesicles, small membrane-bound sacs that transport material within cells. Proteins and lipids are synthesized in the ER and are transported to the Golgi for further processing and modification.

In addition to modifying proteins and lipids, the Golgi is also involved in the transport of these molecules within cells. The Golgi sorts and packages proteins and lipids into vesicles, which are then transported to their destination within the cell or secreted outside the cell.

Dysfunction of the Golgi apparatus can have serious consequences for the cell. For example, if the Golgi is not able to properly modify proteins and lipids, this can result in the production of abnormal or non-functional proteins and lipids. This can lead to various diseases and disorders, including cancer, neurodegenerative disorders, and immune system disorders.

One example of a disease caused by Golgi dysfunction is a type of cancer called T-cell acute lymphoblastic leukemia (T-ALL). T-ALL is a blood cancer that affects the immune system and is caused by the abnormal production of T-lymphocytes, a type of white blood cell. Research has shown that Golgi dysfunction plays a role in the development of T-ALL, as it leads to the production of abnormal T-lymphocytes.

Another example of a disease caused by Golgi dysfunction is a type of neurodegenerative disorder called Niemann-Pick disease type C (NPC). NPC is a rare, inherited disorder that affects the brain and spinal cord. It is caused by defects in a protein called NPC1, which is responsible for transporting cholesterol out of cells. NPC1 is modified in the Golgi, and if this modification is not carried out properly, the protein becomes non-functional and leads to NPC.

In conclusion, the Golgi apparatus plays a critical role in the sorting, modification, and transport of proteins and lipids within cells. Dysfunction of the Golgi can have serious consequences for the cell and can lead to various diseases and disorders. Understanding the role of the Golgi in cellular function and how it can become dysfunctional is an important area of research that may lead to the development of new treatments for diseases caused by Golgi dysfunction.

How does the malfunction of the Golgi apparatus affect other organelles? 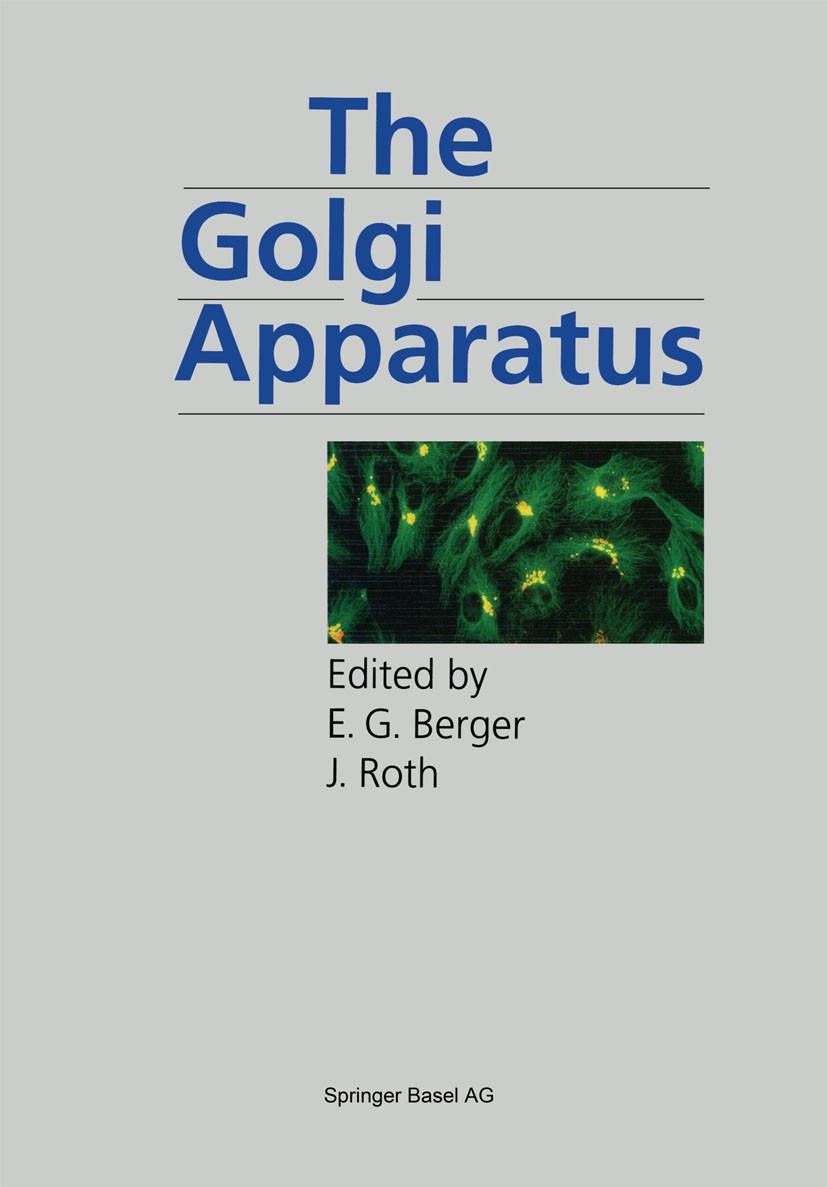 According to a number of reports, impaired glycosylation may trigger the process of epithelial-to-mesenchymal transition EMT. Do you want to live a longer life in good health? Primary familial brain calcification PFBC is a rare inherited neurodegenerative disease characterized by multiple brain calcifications. This area of the Golgi is the point at which proteins are sorted and shipped to their intended destinations by their placement into one of at least three different types of vesicles, depending upon the Types Description Example Exocytotic vesicles constitutive Vesicle contains proteins destined for Secretory vesicles regulated Vesicles contain proteins destined for extracellular release. Phospholipid asymmetry and phosphate homeostasis are important for normal Golgi structure and function. Further studies find that Golgin-84 triggers hyperphosphorylation of the Tau protein by activating cdk5 and an extracellular signal-regulated kinase, which in turn induces Golgi fragmentation. 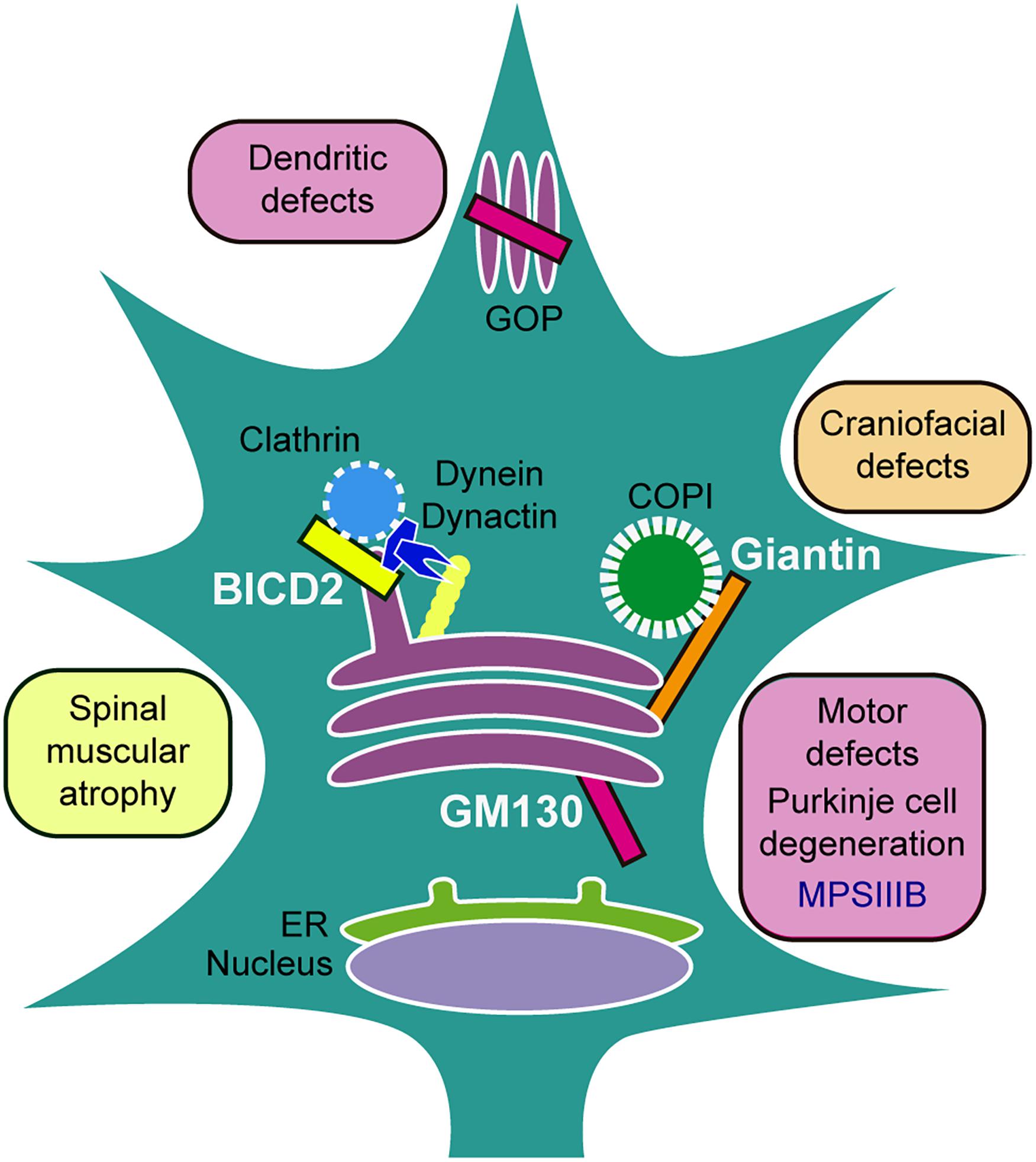 Knockdown of LDHA impaired the formation of mineralized nodules and ALP activity. Under pathological conditions, such as in cancer, aberrant Golgi dynamics alter the tumor microenvironment and the immune landscape, which enhances the invasive and metastatic potential of cancer cells. Essential cell biology 4th ed. Cargo from the ER move between these two domains, and randomly exit from any level of the Golgi to their final location. The dynamic structure and functional integrity of the Golgi is determined and finely regulated by the orchestrated contribution of microtubule and actin cytoskeletons, golgins, and Golgi stacking proteins among others. Feature Papers are submitted upon individual invitation or recommendation by the scientific editors and undergo peer review prior to publication. Studies have found that the accumulation of insoluble proteins found in patients with SALS and FALS is immunoreactive AD and Aβ, Tau AD is a common neurodegenerative disease characterized by progressive dementia in the elderly.

Golgi apparatus: What Is It, Where it is, What is the Function, and Important Facts Histochemistry and cell biology, 140 3 , 239—249. There are a great many exceedingly complex and still comparatively poorly understood structures inside our cells. There are three main destinations for biochemicals released from the trans Golgi network: 1 inside the cell to the lysosomes; 2 the plasma membrane and 3 outside of the cell. Function The Golgi apparatus is a major collection and dispatch station of protein products received from the The structure and function of the Golgi apparatus are intimately linked. In this case that appears to be figuring out a way to remove plaques via gene engineering, the right drugs, little robots, whatever , not identifying the root cause of why the plaques are there. Golgi apparatus is a highly dynamic organelle involved in the processing and classification of lipids and proteins. This Special Issue will focus on Golgi dysfunction in disease and will collect original research articles and reviews that expand our basic knowledge of the Golgi apparatus. 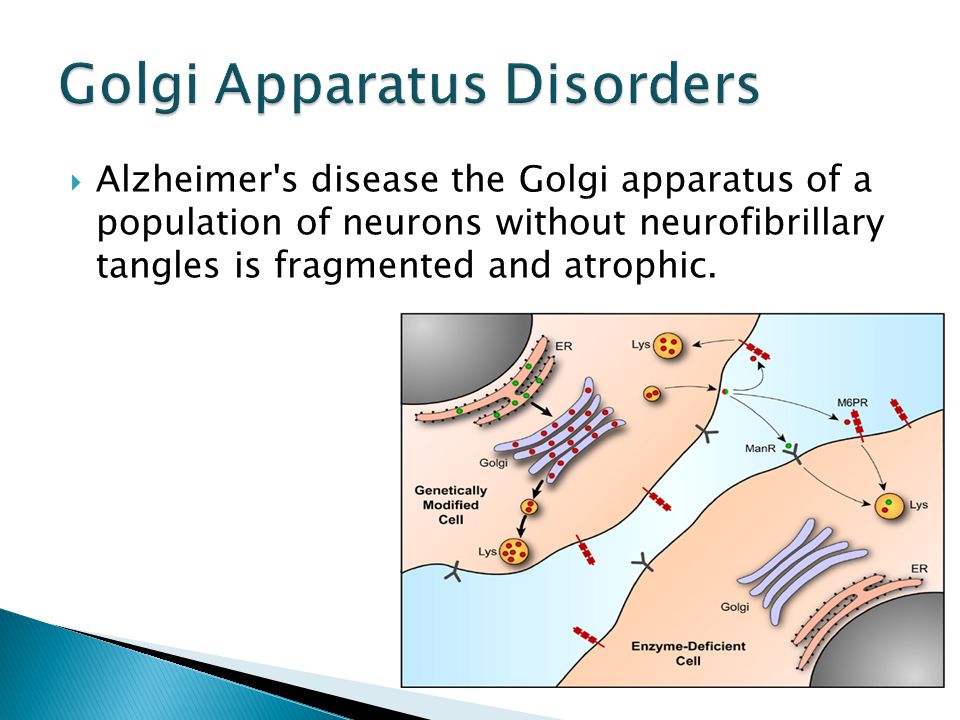 This peculiar organelle protrudes at the surface of almost all cells and fulfills many cellular functions, in particular during development, when a dysfunction of the primary cilium can lead to disorders called ciliopathies. Although more and more patients are diagnosed with SLC35A2-CDG, the link between defective galactosylation and disease symptoms is not fully understood. Please visit the In mammalian cells, SLC35A2 delivers UDP—galactose for galactosylation reactions that take place predominantly in the Golgi lumen. Vesicles containing biochemicals for continuous secretion flow to and fuse with the plasma membrane. . We also found damaged mitochondria and increased apoptosis in the PFBC dopaminergic neurons and astrocytes. Interesting, studies have found that the increase in Golgi fragmentation is age-related and is associated with hyperphosphorylation of Tau protein.

The homeostasis of Pi may influence the Golgi apparatus by phospholipid asymmetry and phosphate homeostasis. It would cause the cells to stop working. This organelle is also involved in the regulation of diverse cellular processes including mitosis, autophagy, and apoptosis. Lentiviral-mediated overexpression of TRIM46 decreased cell resistance against HG-induced ferroptosis, whereas knockdown showed the opposite effect. Its main function is to promote microtubule synthesis and stabilize microtubules. Autolysis is vital because it allows for an organism to remove worn-out cells. Many studies have found that Golgi is involved not only in the secretory process of cells, but also in the post-translational modification and hydrolysis of proteins of protein glycosylation. 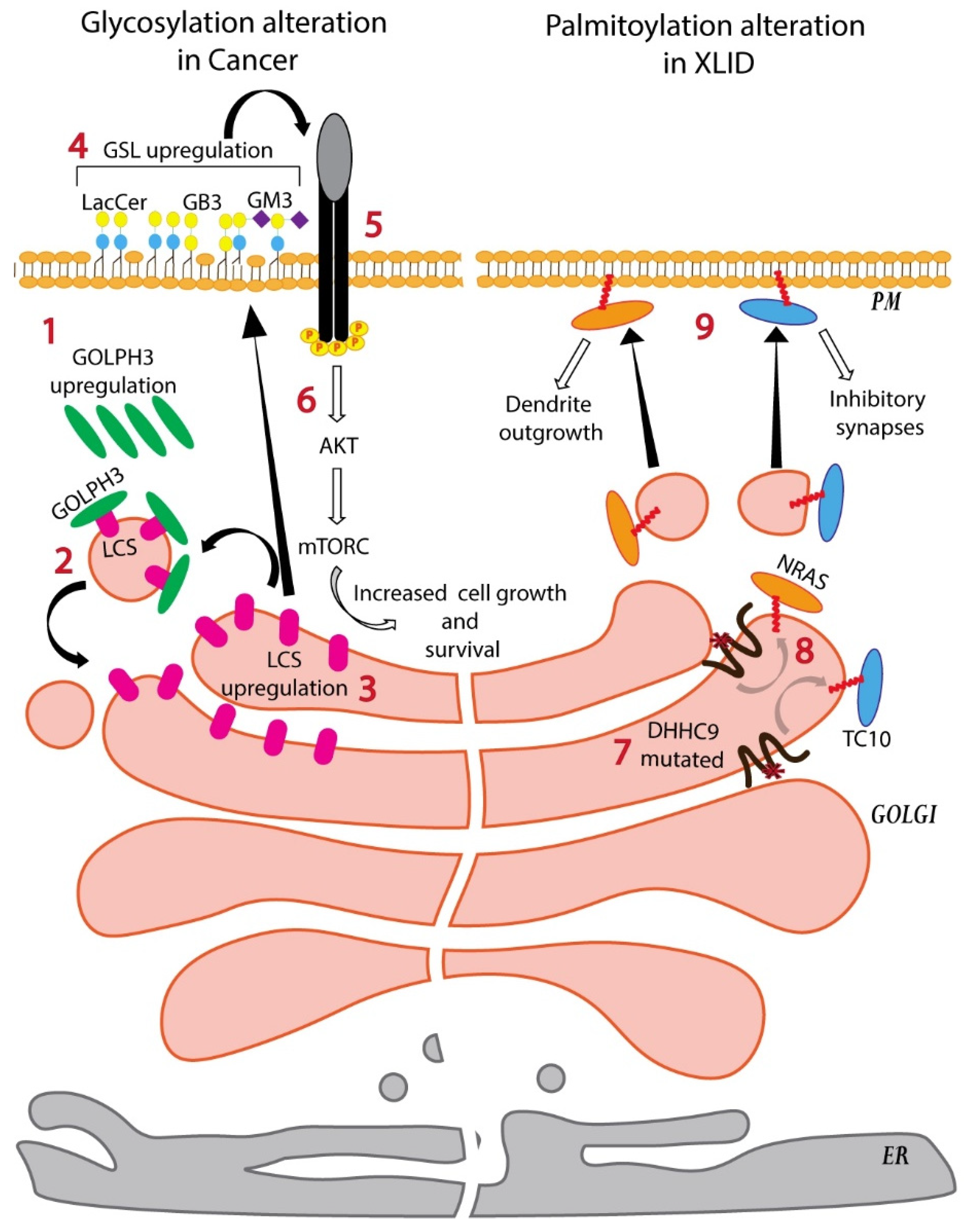 Furthermore, depletion of SLC35A2 triggered Golgi compaction. The cis face of the Golgi apparatus, where they fuse with the Golgi membrane and empty their contents into the Those proteins destined for areas of the cell other than either the trans face, to a complex network of membranes and associated vesicles known as the trans-Golgi network TGN. Mechanistically, knockdown of LDHA decreased histone lactylation mark enrichment on JunB promoter, and exogenous lactate treatment rescued this effect. The primary susceptible fungal cells may evolve a resistance after longer exposure to antifungal agents. The Second Affiliated Hospital and Yuying Children's Hospital, Wenzhou Medical University, Wenzhou, Zhejiang 325000, China 2. One possible consequence of mutations in Golgi complex proteins is that they cause gross changes in the morphology of the entire organelle and protein mislocalization, which together result in functional problems such as impairment of glycosylation. The Golgi apparatus is at the center of protein processing and trafficking in normal cells.

What is the effect of malfunctioning Golgi bodies?

It plays a role in maintaining the cytoskeleton and acts as a transprotant pathway for organelles, vesicles, proteins and signaling molecules, mostly localized in neuronal axons. Key Laboratory of Structural Malformations in Children of Zhejiang Province, Wenzhou, 325000, Zhejiang Province, China Title: The Golgi as a therapeutic target in genetically-defined subsets of cancer Authors: Jonathan M. However, this change is generally irreversible and can even accelerate or cause cell death associated with Golgi and neurodegenerative diseases. We propose that early developmental formation of somatic purinergic junctions represents an important interface for microglia to monitor the status of immature neurons and control neurodevelopment. TRIM46 and GPX4 form a regulatory pathway that controls HG-induced ferroptosis of HRCECs. A more accepted idea is that chemicals being processed in the Golgi apparatus travel from one cisterna to another in transport vesicles or possibly along microtubules. Introduction of Golgi Bodies Golgi is a highly polar organelle composed of many flat vesicles.

Dysfunction of the Golgi apparatus linked to neurodegenerative diseases This model falls short on explaining the observation of discrete compartments and polarized biochemistry of the Golgi cisternae. The participants provided their written informed consent to participate in this study. Title: The role of the Golgi apparatus defects in the various cancers: recent developments and the potential of targeted therapies. Note that the above is all layman speculation. After Roche reported yesterday that crenezumab failed for a second time with a higher dose, this leads one to rethink the pathology of the biology. The vesicles are then transported away for use in the cell and beyond. After packaging, the vesicles bud off and are stored in the cell until a signal is given for their release.