Confederation refers to the union or league of political entities, such as states or provinces, for the purpose of cooperation and mutual support. It is a form of government in which power is shared between the central government and the constituent political units. Confederation is often seen as a midway point between a fully centralized state and a completely decentralized state. It allows for some degree of autonomy for the constituent units, while also providing for a unified decision-making process at the national level.

The idea of confederation has been experimented with in various parts of the world throughout history. One of the most well-known examples is the United States, which began as a confederation of 13 colonies before eventually evolving into a more centralized federal system. The Articles of Confederation, which served as the first constitution of the United States, established a confederation in which the states retained a great deal of power and the national government had very limited powers.

Another example of confederation is the Swiss Confederation, which is a federal state made up of 26 cantons (states) and four administrative districts. The Swiss Confederation has a long history dating back to the Middle Ages, and it has a unique system of government that has evolved over time. The cantons have a great deal of autonomy and are responsible for many of their own affairs, including education, healthcare, and public safety. The national government, on the other hand, is responsible for foreign affairs, defense, and certain aspects of economic policy.

Confederation can also be seen in the European Union, which is a political and economic union of 27 member states. The member states retain a high degree of sovereignty, but they also agree to coordinate certain policies and make decisions together through the EU's institutions. The EU has a single market and a common currency, the euro, which is used by 19 of its member states.

One advantage of confederation is that it allows for a degree of decentralization, which can be beneficial in a diverse country or region. It allows the constituent units to have a say in the decisions that affect them and to have some control over their own affairs. This can foster a sense of ownership and responsibility among the people and promote local decision-making. Confederation can also be more efficient, as it allows for the division of labor between the central government and the constituent units.

However, confederation also has its drawbacks. It can lead to a lack of unity and cohesion among the constituent units, as they may have conflicting interests or priorities. It can also lead to a weaker central government, which can make it difficult to implement national policies and achieve national goals. In addition, confederation can be more prone to gridlock, as it requires a high level of cooperation and consensus among the constituent units.

. Articles of Confederation- A document, adopted by the Second Continental Congress and approved by the states, that outlined the form of government of the new United States. Republic- A government in which citizens rule through their elected representative. Land Ordinance of 1785- A law that established a plan for surveying and selling the federally owned lands west of the Appalachian Mountains. Republicanism- The idea that governments should be based on the consent of the people. Confederation- An alliance permitting states or nations to act together on matters of mutual concern.

Chapter 5 Experimenting with Confederation Section 1 Do Now Response: If I were to be president, I would make sure that everyone should be paid more because there are a lot of jobs where people work super hard and get paid a certain amount that is not enough for them to provide for either for their families or for themselves. . . . . .

Experimenting with Confederation During the Revolutionary War the 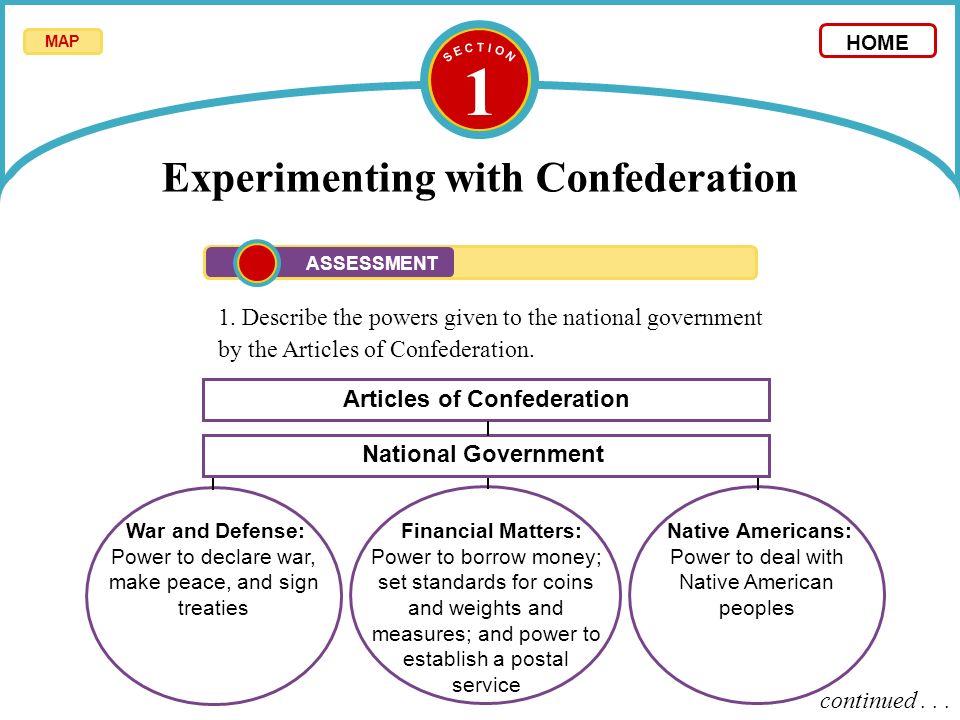 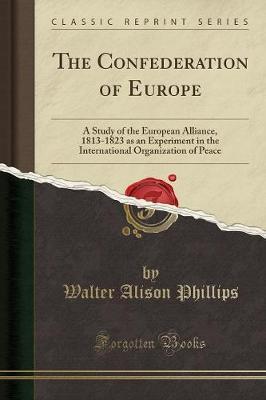 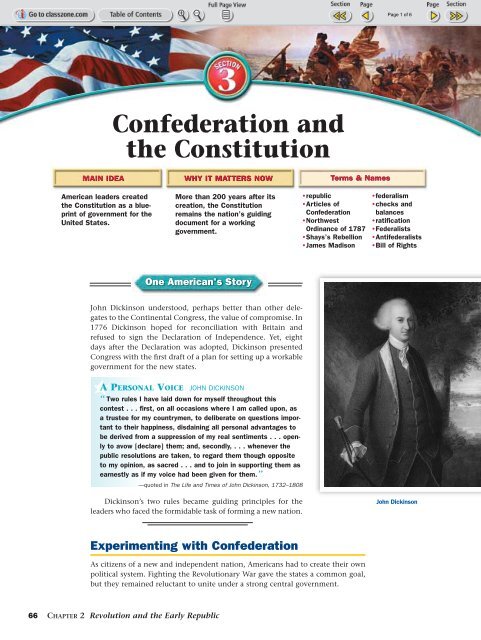 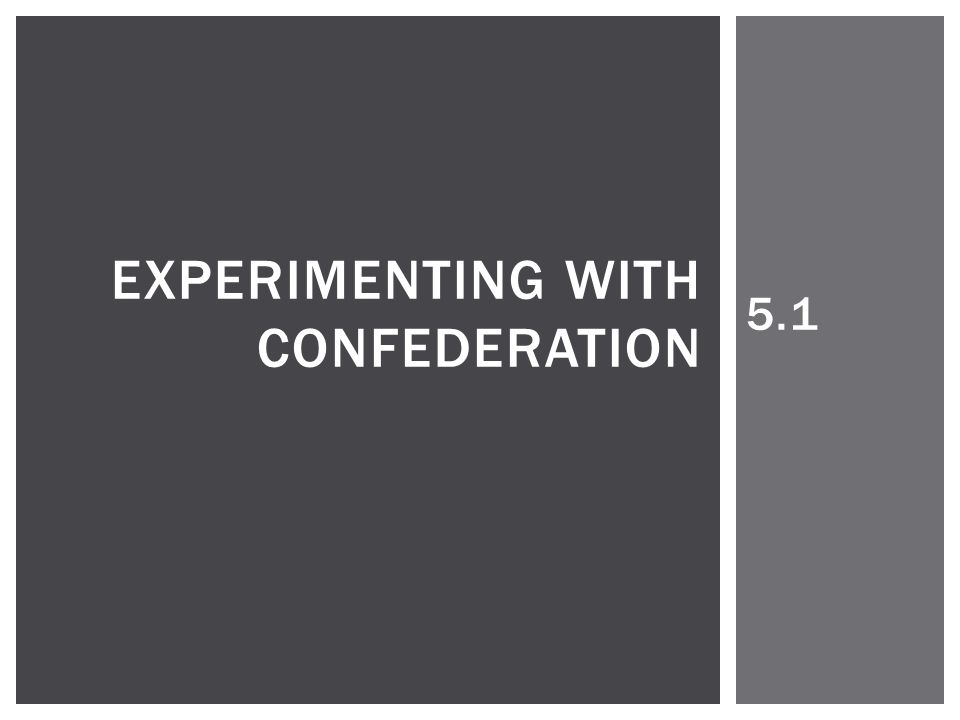 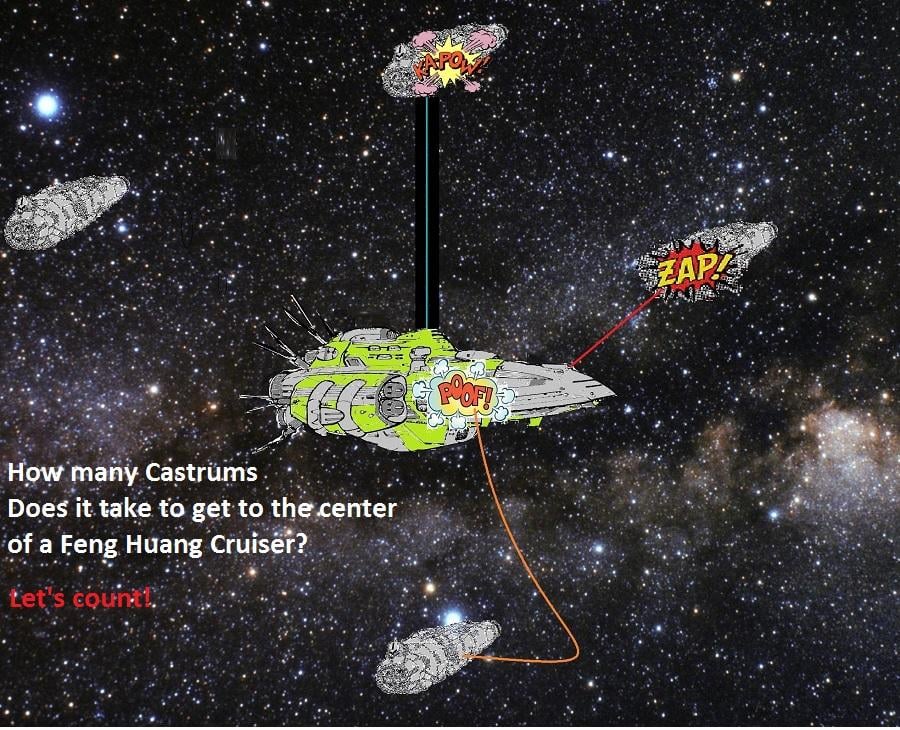