The Denver II Test, also known as the Denver Developmental Screening Test II, is a standardized assessment tool used to evaluate the developmental milestones of children from birth to 6 years of age. It is used to identify potential delays or disabilities in areas such as fine and gross motor skills, language and communication, cognitive skills, and social-emotional development.

The test is designed to be administered by trained professionals such as pediatricians, nurses, or early childhood educators. It consists of a series of tasks and questions that are presented to the child in a specific order, and the child's responses are scored based on predetermined criteria. The test is typically completed in about 20-30 minutes, and the results are used to determine the child's developmental level in each of the four areas mentioned above.

One of the key strengths of the Denver II Test is its wide age range, allowing for the assessment of children from birth to 6 years old. This is particularly important as children's developmental milestones tend to occur at different ages, and it is important to identify any delays as early as possible in order to provide the necessary interventions and support. The test is also relatively quick and easy to administer, making it a useful tool for busy professionals working with young children.

However, the Denver II Test has also been criticized for its reliance on normative data, meaning that it compares a child's performance to the average performance of children within the same age range. This can potentially lead to the underestimation of a child's abilities or the overestimation of their delays, depending on their individual strengths and weaknesses. Some have also pointed out that the test may not be sensitive enough to detect subtle delays or disabilities, particularly in children who are functioning at the higher end of the age range.

In conclusion, the Denver II Test is a widely-used assessment tool for evaluating the developmental milestones of children from birth to 6 years old. While it has some limitations, it is still a valuable tool for identifying potential delays or disabilities and providing the necessary interventions and support. It is important to use the test as one part of a comprehensive evaluation process, along with other assessment tools and observations, in order to get a full understanding of a child's developmental strengths and needs.

For this purpose, clinicians may select among various specific screening tests for preschool and school-age children that focus only on language. This sample has relatively minor demographic differences between it and the U. The percent agreement rate for each of the four types of reliability was generally high with a few exceptions - both 7-10 day test-retest reliability assessments had mean percent agreement scores of less than 50%. Developmental skills can be formally assessed with a variety of tools, such as the Denver Developmental Screening Test II DDST-II , Bayley Scales of Infant Development, and Gesell Developmental Schedule eSlide 2. Developmental delays may be due to a lack of cooperation on the part of the child due to factors such as fatigue, fear, illness or some organic factor such as deafness. Thus, when children of a different culture do not perform a test item, we do not know whether they have merely failed in a specific act or lack the social, representational, or motor skills that the item was designed to tap. It screens a child for cognitive delays and behavioral problems from birth to 6 years of age. 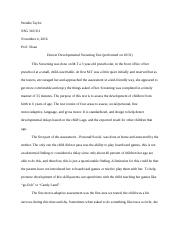 Neutropenia was three times more common 63% in treated infants than in untreated infants. The audiologist can then program the aid with various signal processing algorithms and frequency responses to minimize the listener's difficulties. Executive function is another common weakness in individuals with fragile X since it is difficult for them to store information in their short-term working memory as they attempt to complete a task, such as putting pictures in a specific order. If you want to know a more complete description of the Denver test, how it is performed and its interpretation, you can find it in this Psychology-Online article. None of the treated infants had worsening of hearing at 6 months compared with 41% of untreated infants.

This study administered three developmental screening tests Denver-II, Battelle Developmental Inventory Screening Test, and Early Language Milestone Scale-2 and two comprehensive assessment measures The Mullen Scales of Early Learning and the Receptive-Expressive Emergent Language Scales to 18 infants and toddlers with FXS 13 boys and 5 girls. The results are not diagnostic. Use of hearing handicap scales enables the audiologist to detect and specify significant communication and adjustment difficulties, select from an array of rehabilitative interventions, and document treatment outcomes for consumers and third-party payers. It would be difficult to assess the social development of Gusii infants on the basis of their response to this item of the Bayley scale. A small bell with 2 inch-diameter mouth 6. Denver Test Table Below is a summary table of the Denver test screening table of acquired functions according to normal motor development.

Denver II Technical Manual. A rubber ball 12 ½ inches in circumference 7. It is administered on an individual basis. Many norm-referenced standardized instruments may be used to establish the child's general level of expressive and receptive language functioning as well as other areas of functioning. The Denver II had the largest number of translations 21 with each of them being standardized in the nation of origin for that language. Height and weight should be measured and plotted. The few listed below are used in many clinics, but many more are available see review by Lesner and Kricos, 1995.

Creating a city that people will remember when they visit. The Denver Scale The Denver Scale of Communication Function for Senior Citizens Living in Retirement Centers, by Zarnoch and Alpiner as cited and reproduced in Hull, 1997 , has been designed specifically for the institutionalized elderly client to determine their need for aural rehabilitation. In the older child, language skills, both spontaneous and responsive, expressive and receptive, should be established, together with an understanding of simple cognitive concepts i. There are several standardized surveys, and each test instrument has different purposes and strengths. Age-appropriate tasks should be demonstrated for each area tested in children between 1 month and 6 years of age. This test can also be used to track children over time. 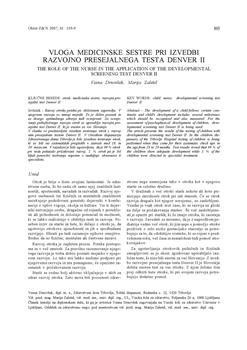 There is little conceptual as opposed to empiric basis for the most popular tests, including the Bayley scales and the Denver Developmental Screening Test. The delayed or cognitively disabled child often presents a challenge to the clinician with respect to the formal examination because of inherent features, such as short attention span and limitations in understanding and cooperation. There was no control group, and hearing was not reported beyond a year of life. These may be supplemented or complemented by the use of parent-based questionnaires e. They usually have FMRP levels greater than 50% and their DNA pattern is unmethylated or mosaic. Also, learning how to read using the phonics system, and performing the steps involved in math functions can be a struggle. That is the case, for example, with the Fluharty Preschool Speech and Language Screening Test II Fluharty, 2001 , which explores articulation, expressive and receptive vocabulary, and composite language in children from 2 to 6 years old.

Denver test: what is it, how is it performed and table interpretation, nursing 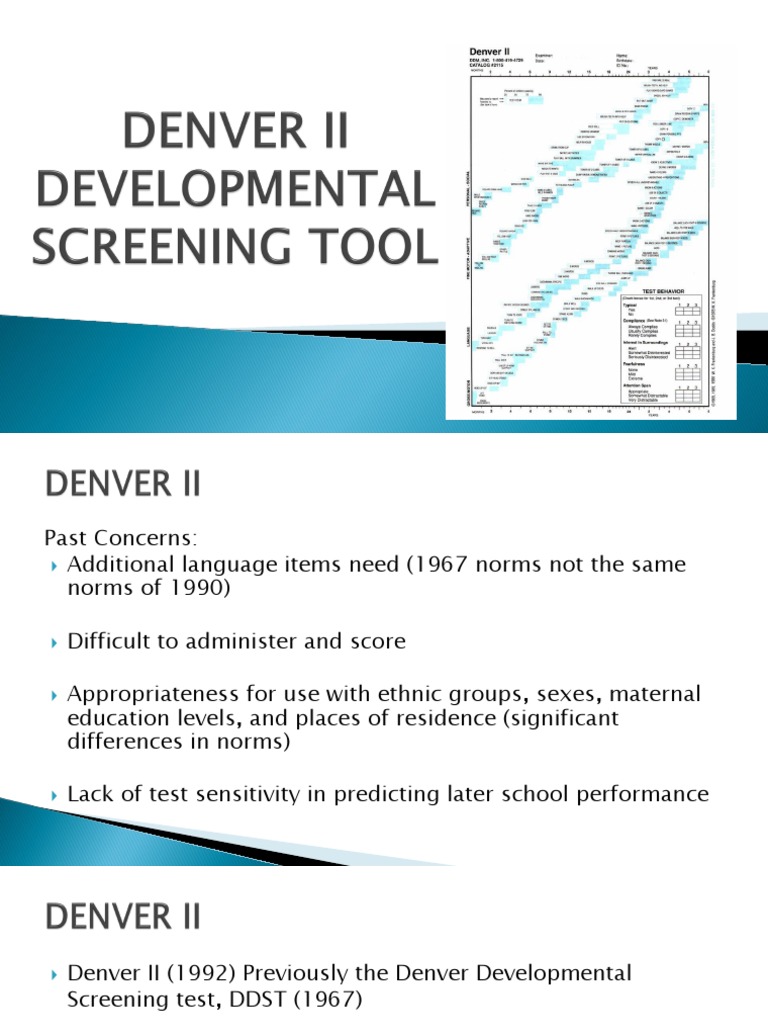 The test has been criticized because that population is slightly different from that of the U. If you want to read more articles similar to the Denver Test: what it is, how it is performed and interpretation, we recommend that you enter our category of Psychotechnical and Mental Agility Tests. For example, 9-month-old infants in rural Kenya, when presented with a doll in the context of the Bayley examination, characteristically exhibit negative responses rather than the social responses e. It also allows for evolutionary monitoring detailing the achievements observed from the previous controls. Treaty of Pediatrics, Nelson Vaughan Mc Kay. Of note, neutropenia was comparable between the two groups and lower than in the GCV trial.

Denver II Technical Manual. The assessment of the child's evolution is carried out considering the set of things he learns and the degree of maturity with which he performs them. A small bell with 2 ½ inch-diameter mouth 6. First I Observed and chose Stapleton area which is historically used to be an old Airport when the city grows and skewed right. For example, processing of verbal directions that require keeping both the instructions and their sequence in mind is difficult for children with FXS. More serious is the fact that items in the test are usually chosen in light of cultural values and the frequency of behaviors in Euro-American children. Frankenburg, likened it to a In 2020 the AAP Council on Children with Disabilities; Section on Developmental Behavioral Pediatrics published a list of screening tests for clinicians to consider when selecting a test to use in their practice.