Cinderella stories, also known as rags-to-riches tales, are a popular theme in literature and folklore around the world. These stories revolve around a young protagonist who overcomes adversity and rises to a higher social status through their wit, bravery, or the help of a magical being. Cinderella stories have been told for centuries and have been adapted in various cultures, resulting in a diverse range of interpretations of this classic tale.

One of the most well-known versions of the Cinderella story is the European fairytale of Cinderella, in which a young girl named Cinderella is mistreated by her stepmother and stepsisters and is ultimately rescued from her miserable life by a prince. This version of the story has been adapted numerous times in literature, film, and other media, and has become a cultural icon.

Another popular version of the Cinderella story is the Chinese story of Ye Xian, also known as The Golden Lotus. In this version, Ye Xian is a young girl who is mistreated by her stepmother and stepsisters and is ultimately rescued by a fish who helps her to attend a festival and win the heart of the prince. This version of the story emphasizes the importance of kindness and compassion, as Ye Xian is able to triumph over her adversities through her good nature.

In the Korean version of the Cinderella story, titled "The Story of Chunhyang," the protagonist, Chunhyang, is a young girl who is sold into marriage to the governor of a province. Despite the challenges she faces, Chunhyang remains loyal to her husband and ultimately triumphs over her adversities. This version of the story emphasizes the importance of loyalty and perseverance.

One notable difference between these versions of the Cinderella story is the role of the magical being or "fairy godmother" character. In the European version of Cinderella, a fairy godmother helps Cinderella attend the ball and win the prince's heart. In the Chinese version of the story, a fish helps Ye Xian attend the festival and win the prince's heart. In the Korean version of the story, Chunhyang does not receive any help from a magical being and instead relies on her own wit and strength to overcome her adversities.

Despite these differences, all of these Cinderella stories share a common theme of the protagonist rising from humble beginnings to a higher social status through their own actions or the help of a magical being. These stories serve as a source of inspiration and hope for readers, reminding us that even in the face of adversity, it is possible to overcome obstacles and achieve success. 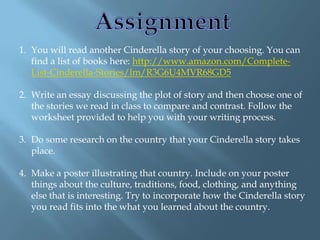 Slowing down and taking more time would help with this. The other is The Rough-Face Girl, which is a legend from the Eastern Woodland tribes. Titles included The Golden Sandal from the Middle East. Sneed read Yeh Shen aloud. Sneed handed out a Venn diagram.

She received everything she desired in life, whether or not her parents approved of it or how expensive it was. Students might say both girls had mean sisters. You might adapt the lesson by sharing some of the food items in the Food Lists section below. The formal Cinderella is a classic fairy tale that has been around for a very long time. When Cinderella is eventually found, they return to the Kingdom where they our married and live happily ever after. Teaching Compare and Contrast Strategies with Different Cinderella Stories My colleagues and I have been working a lot this year on comparing and contrasting texts on a similar topic with the upper grade students at my school.

Comparing Cinderella and The Rough 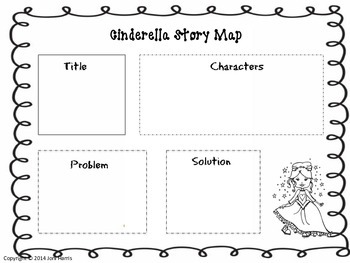 The Prince takes her to his palace and they get married. Interests and Talents The student: has a well-developed sense of humor. Many years later Disney released its own versions of these Grimm fairy tales called Tangled, a modern take on Rapunzel, and Cinderella published in 2010 and 1950 respectfully. She then goes to the ball to meet the prince. However, her destiny was changed when she married with the Cinderella Research Paper 708 Words 3 Pages Cinderella was the princess of Sparta, and she was a loving and caring queen and all her subjects loved her. Then we identify common elements. She sings to keeps herself happy during her enslavement which, along with some help from the falcon god Horus, ultimately delivers her from her predicament. 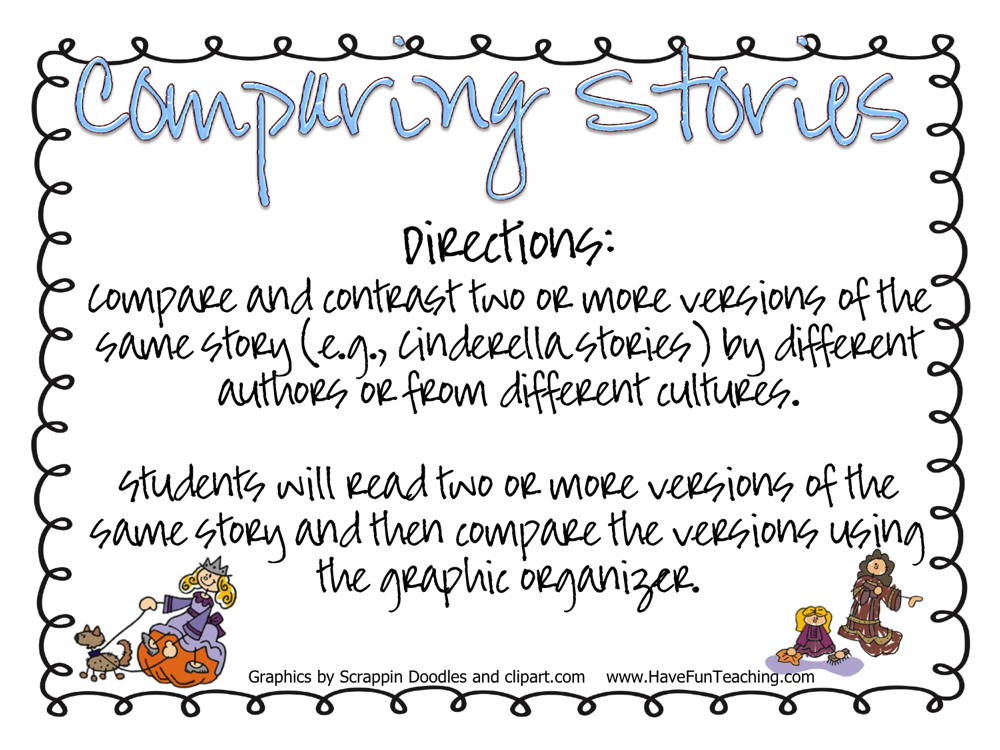 If students find a food in multiple sources, they might consider it "verified"; those foods they find in only one source might require additional research to verify. Compare and Contrast Lesson Plan Today I'm sharing my 4-day compare and contrast lesson plan using different Cinderella stories from around the world CCSS 3. Sneed stared at a copy of the Common Core State Standards for Literature. Additional work on these topics would be incredibly helpful. Food Lists Our research uncovered the Old and New World foods below. 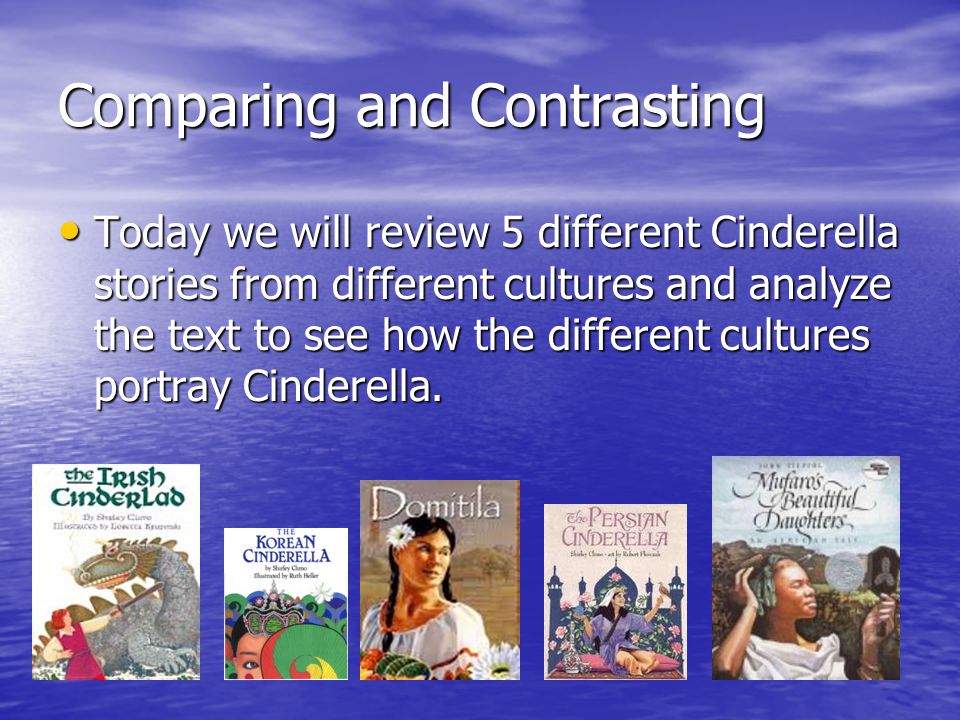 Or you can simply print out the work sheet and let students use pencils or pens to complete it. Luckily she is gifted with beautiful clothing, enabling her to attend a festival, meeting her one true love. Sam cooperates consistently with others becomes Sam needs to cooperate more consistently with others, and Sally uses vivid language in writing may instead read With practice, Sally will learn to use vivid language in her writing. Adding Some Parody The following day, Ms. So, she wished to meet the prince and it finally happened. Gender Stereotypes In Disney Movies Essay 997 Words 4 Pages In the early 20th century American style, the princess was shown through a traditional fairy tale and they needs rescuing by the nearby prince.

On the contrary, the movie did not have such objective, and the directors wished to provide a new look into the well-known story. Practicing these at home would be very helpful. Behavior The student: cooperates consistently with the teacher and other students. When the Disney Cinderella was filmed, it was a great chance for the directors to reconnect with the European film-makers after the World War II. AttitudeBehaviorCharacterCommunication SkillsGroup WorkInterests and TalentsParticipationSocial SkillsTime ManagementWork Habits Attitude The student: is an enthusiastic learner who seems to enjoy school. Then continue with The Rough-Face Girl, which is a Native American tale. First, I will be comparing the stories.

They might work on their own, with a partner, or in small groups to list on the The Rough-Face Girl, the area devoted to things that are unique to Cinderella, and the area where the two circles intersect that includes things the two stories have in common. Ask a student to share his or her own short version of Cinderella. As her eyes moved across the page, she noticed several pins with Cinderella stories. However, the representation and the perception of Cinderella from Disney and from the movie differs significantly, given the time frame when it was filmed. The representation of Cinderella in the Disney world conveys one of the most common perceptions of Cinderella known from fairytales and transformed into the pop-culture. 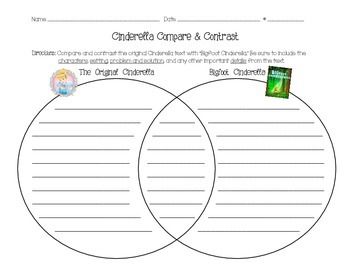 Some people have made different kind of forms of Cinderella such as: movies, plays, story books etc. Cinderella, the protagonist, is an outcast her family, as her father is her only blood relative. All of these 900+ stories are popular including the Norwegian version Katie Woodencloak and the French version Cinderella. She is forced to do housework and is not allowed to take part fun activities or share luxuries with her stepsisters. This repetitive plot line is in the early Disney Princess movies, Snow White, Sleeping Beauty, and Cinderella and in more recent releases like Beauty and the Beast, The Little Mermaid, and Tangled. Notice that some items appear on both lists -- beans, for example. Born the fifth child to an affluent Chinese family her life begins tragically.